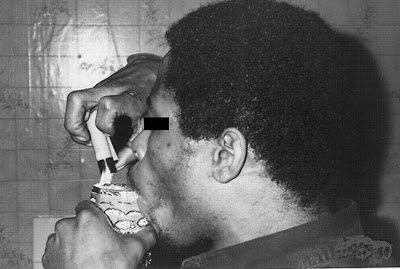 I can see armed street gang members in guard uniforms legitimizing their extortion, intimidation and control over the neighborhoods.

The real police will come in on invitation only. The security guards will be given limited arrest powers and will be engaged in revenue generating activities like writing various court citations.

I’m not sure just how the city plans on skirting laws that require proper selection and training of people enforcing laws. They need to learn about P.O.S.T. and what that’s all about. Cops are sworn to their oaths of office, security guards are not. It is permissible to resist the arrest of a private person but not the police.

There are too many problems to mention here. That’s not to say private guards cannot be hired to handle limited security functions for courthouses and government buildings. Enforcing laws on our streets is no job for amateurs.

Generally the people who become security guards do so because they can't qualify to be police officers. There are simple reasons such as age but more often their disqualifications involve background troubles, low intelligence, competency, or physical incapacitations.

As for the Aldermen proposing this idea there is help available for them at Cocaine Anonymous.
Posted by Paul Huebl Crimefile News at 3/20/2009 06:10:00 PM

Paul, what the heck is P.O.S.T? Isn't that a California thing? That was never covered when I was in Unit 044.

P.O.S.T. was a California thing that was adopted by Illinois with the name in recent years. You do know about, monkey see, monkey do right? You sound like an O’Brien Street fugitive…

Nothing but bad is going to come of this! Kinda like saying TSA is Special Ops

Its the Chicago way!

Is that Marion Barry at the White House bathroom??

Nothing good will come of this.