Prosecutors Hope For A Compromise Verdict On Spector Murder Trial. 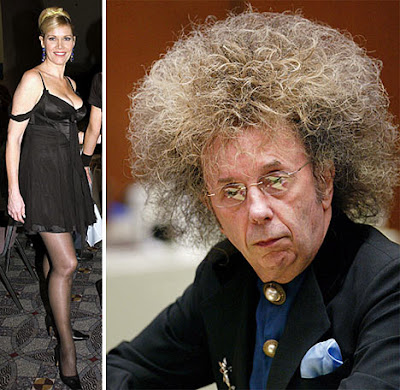 Los Angeles, CA—Prosecutor’s know they have a paper thin case against music legend, Phil Spector in connection with the death of Lana Clarkson. The facts in the way of a conviction are that the woman was a drug addicted, alcoholic with the weight of the world on her despondent shoulders and the fact that the science of this case exonerates Spector.

The trial has been a non-stop hate campaign and character assassination of the producer by a lifetime's collection former jilted girlfriends. Then there’s the illegal alien limo driver who got a free Green Card for telling the cops what they wanted to hear. He claimed to have heard a “confession quote” from a distraught mumbling Phil Spector.

Prosecutors fought tooth and nail for a lesser charge because they know a lesser conviction is easier to obtain. That’s a disingenuous reason to say the least. Judge Larry Paul Fidler has done all he could do to help prosecutors convict Spector. Now the judge included an uncharged Involuntary Manslaughter count to allow the jury to compromise rather than acquit. A compromise by jury members is wrong. Either Spector is a murderer or he’s not.

Under our system of law it is better that ten guilty men go free than one innocent man be convicted, except in the court of Judge Larry Paul Fidler.

The jury will struggle with a guess as to what they think really happened and arrive at a verdict. A guess is wrong since there must be proof beyond a reasonable doubt. I stand convinced that the filing of charges in this case was a travesty.

If Spector is convicted of either charge he will die in prison. That fate should be based on more than a guess.
Posted by Paul Huebl Crimefile News at 3/20/2009 06:58:00 PM

I worry about anyone who agrees with me all the time.

So your making a guilty guess on this one. Knowing guessing is wrong would you vote to convict on your best guess without a way of knowing what really happened?

Lana Clarkson was like many folks who go to hollyweird to make it big.She had very limited success and wasnt making it.

There are people in this world that are gold-diggers.There are many folks who will do anything to make it in hollyweird and casting couches do exist.

Lana Clarksons death while tragic,was not a homicide.Using Spectors past against him is biased investigator technique,very common with amaturish detectives.

I am not making a guess. I have watched the trial on TV. Read the transcripts etc... I looked at it from a cops point of view and as a juror......

We all know other then when you have a stone cold confession, there are things left up to chance. This was no coincidence what happened.

He had a flavor for gun play. This one went south.

Most all murder cases are good police work, coupled with evidence, facts, and witness testimony. From what "i" see, he did it.

Just the facts sir, nothing but the facts.... lol

i know some one in tarrant county texas accused of a felony. False, accusation, what a pile.

Now, I know what the hell Paul is talking about now.

The trial wasn't televised so I don't know what trial you were watching Cpdcoppurr. Phil Spector is innocent and the science and evidence has proven it. At the last trial the judge said he thought about the manslaughter charge but decided not to give it because it wasn't warranted in this case. What all of sudden it's warranted? The prosecution didn't have a case from the very beginning.They knew it then and they know it now.

I will side with Cpdcoppurr on this one, Paul.

The whole "self-gunplay" thing just doesn't hold water. No matter how many times and how many different ways I have looked at it... I STILL think he is guilty! I do not feel the need to witness him holding the gun and pulling the trigger. Perhaps she WAS rummaging thru his personal property searching for drugs or cash... we will never know. He lost control, coupled with his own intoxication and neurological disorder, and whether intentional or accidental, shot her. Plain and simple.

I didn't witness OJ butchering Nichole and Ron either, but I will always believe he is also 100%, without a doubt... GUILTY!!!

Nothing has changed. 55% of US gun homicides are suicides. A gun shot in the mouth is almost always a certain suicide (name 10 cases where it wasn't). The lack of blood or other material on Spector indicates he wasn't in the room when the gun was fired -- the traces came from him running into the room immediately afterwards.

This case is a disgrace for the courts - it was brought for political purposes and personal gains.