On The Lam With Lindsey Lohan 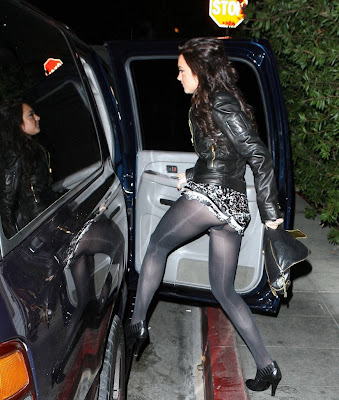 Hollywood, CA—She’s frantically looking for a lawyer and bail bond arrangements at this hour. This legendary lass would much rather bed with her “Daddy DJ” Sam Samantha Ronson then bunk with the ladies in the L.A. County Jail. The problem is a pesky $50,000.00 arrest warrant over a probation issue stemming from a 2007 DUI conviction.

Where does a more recognizable face duck the law? Will one of her paparazzi pals rat her out so he can snap that big money picture of this lovely lesbian in handcuffs? We all know the answer to that one. Fame has its price.

A special request to Lindsey and Blair: Let this old PI in on the place and time of surrender so I can get that hot photo, I can really use the $$$!

Yikes! TMZ.Com has an update: "3:49 PM ET Three LAPD cops were knocking at the door, trying to get Lindsay and Sam to open it but they would not. One of the cops was pacing the property. The cops have left the front door but they're still in the area. One of the cars left the house but is parked up the street. Word is they may arrest Lindsay and take her to jail.

The cops now tell us they were called for a disturbance and not there to arrest Lindsay.

Sam and Lindsay have gotten into a nuclear fight at Sam's house. The police are trying at their front door to talk to Lindsay and Sam but they will not open the door. The two are definitely still in the house

We're told the police are trying to serve Lindsay her warrant"

TMZ,Com has more! "UPDATE: "4:20 PM ET Here's the latest. The cops have left the house. We're told the LAPD will not arrest Lindsay for the warrant, at least not now. Sources say Lindsay will not surface until the court hearing on Monday. If she does go out in public and cops see her she risks getting arrested. So it's unlikely she will show her face -- if she's smart -- until Monday AM."
Posted by Paul Huebl Crimefile News at 3/14/2009 10:31:00 AM

Personally I gave up on her long ago. She's a prima donna and deserves all the grief she brings down upon herself.

It's too bad, she wasn't a bad actress, but I doubt anyone is going to deal with her nonsense anymore.

I thought you hated tmz

I don’t hate TMZ. I just get annoyed when they show privacy invading pictures of entertainers who have gotten older and put on weight. Sometimes they are cruel and that’s not right. If they are accurately reporting something newsworthy I have no problem with that.

Of course If you become a weight loss spokesperson and then gain back all the weight plus after a big payday you’ve suddenly become newsworthy.