A Matching Pair of Despots 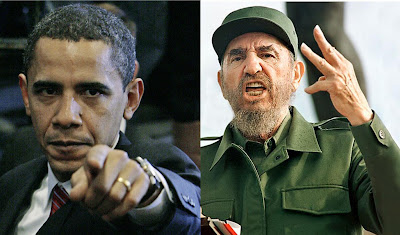 Washington, DC—They’re both are cut from the same cloth and it’s only natural that Barack Obama would extend his friendship and allegiance to a reprehensible rogue Communist nation like Cuba.

The Obama Administration has announced their intent to lift sanctions and travel restrictions to Cuba. This is a country run by a Communist dictator that seized property of American citizens and corporations at gunpoint. Thousands of Cubans were murdered by that ruthless dictator Fidel Castro.

The human rights record of this island prison is abysmal. What Cuba needs if freedom from Marxism. America has let the Cuban people down by not protecting them.

I fully expect Obama and his Marxist pals in our Congress to shower the Communist thugs with taxpayer money before too long. This is when we should be showering these killers with napalm.

I’m sure that we will have many more outrages like this before Obama is removed from the Whitehouse by ballots or a mob of patriots.
Posted by Paul Huebl Crimefile News at 3/09/2009 02:10:00 PM