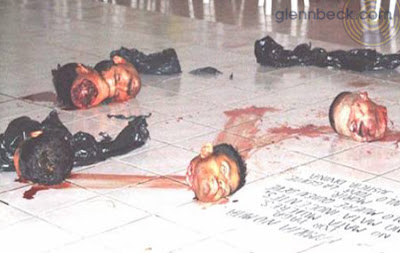 Let me apologize for the gruesome and graphic photo here. This is one of hundreds law enforcement officers have sent me to show just what’s going on in our border towns. I used this photo because it’s of poor quality compared to the other photos and videos that show this sickening horror fueled by our American Drug War. If you are shocked, that was my intention because we as a country have the power to stop this carnage. We must stop this now.

Washington, DC—With so many hundreds of billions of dollars wasted on the so called Drug War America’s addiction for narcotics is stronger than ever.

The forced treatment programs for those addicts arrested just don’t work. For treatment to work it must come as a result of desire by the addicted to get cured. Prison has proven to be counterproductive since all the likeminded addicts are together and exchange ideas on furthering their drug activities.

The real victims are not the addicts. They are the thousands murdered every year by criminals committing crimes so they can pay the Drug War fueled extreme prices for the banned substances. The other victims are the taxpayers, businesses damaged by crime and the vast underground cash drug economy.

The worst people from the drug countries invaded our borders to profit, murder, and exploit the conditions the Drug Prohibition has delivered.

The Drug War is a solid example of how good intentions bring unexpected results. The only people that benefit are the Drug Lords and Drug Czars.

Because of government failure Mexico needs the Drug War for their economy. Mexico would have failed long ago without the constant flow of cash and jobs related to narcotics. At the same time American government officials have profited handsomely with government contractors who are also political campaign contributors raiding our treasury.

Narcotics not used for under the direction of medical providers should be deregulated. The cost to addicts will drop to that of sugar or coffee. The bloodshed will end, and the criminal organizations will fold. The flow of criminals into the United States will dramatically decrease without the illegal drug trade.

Narcotics enforcement here should simply be through zoning laws and existing laws for protection of children, public intoxication or impaired driving.

If there was any data at all that showed the Drug War reduced demand by Americans there might be justification for this crusade. The exact opposite is true as the demand and prices have increased along with the Drug Holocaust happening today along the Mexican Border.

A side note: For those who don’t remember or never knew America West Airlines exists today because of the drug smuggling efforts and invested profits of four founding airline pilots. They were apprehended and sent to Club Fed but their airline continued.
Posted by Paul Huebl Crimefile News at 3/29/2009 10:21:00 AM

There's more money being made by people fighting this endless war than by the cartels themselves!


Not to mention it gives an excuse for unconstitutional search & seizure, asset forfeiture, anti money laundering, laws etc., which are all about politicians doing what they do best - controlling people

Another excellent, thought provoking topic, Paul.
I agree 100% but fear that this will never happen. As the first poster mentioned, there is too much money at stake for those currently running this fiasco referred to as "The War on Drugs". Obama had his chance a few days ago to come out in favor of legalizing marijuana and he took the cowards approach. We need to boot these politicians out of office who refuse to seriously consider legalization. The definition of insanity is doing the same thing over and over and expecting different results. That is exactly what we have been doing since the 70's.

I guess my question is Name Me One Country where illicit narcotics have been legalized and the crime statistics have dropped afterwards?

Name me one country where the legalization of narcotics has lowered the crime rate for home invasion, burglary, prostitution, muggings, breaking & entering, etc.

Show me one country where this 'enlightened' nirvana policy has worked?

Paul, it's crime and you of all people should know that 'good intentions' won't overcome crime.

But Still Name Me One Country...

I don’t think there are reliable crime statistics for any country including our own.

I know Chicago police manipulated whatever they sent to the FBI to make city politicians (the mayor) look good. I do know we have more people behind bars than any other country.

I don’t know any industrialized or civilized country that does not regulate narcotics. They have decriminalized them but they tax them to death and they require addicts to get them through medical providers. They still have a vast underground network in the UK and the Netherlands.

Actually, I'll go one better. We should create retreats for addicts and provide them with all the pharm grade narcotics they can inject. We can use the old military bases that are being closed around the country. That way, they're not out stealing or begging for the small amount of money required to get the drugs. We can even provide the small amount of food they'll eat. Depending on the type of narcotic, if they're using 24/7, they should be dead within a year, maybe less. No more drug gangs, no more theft for money for drugs, and the actual junkies wouldn't even be around for that long.