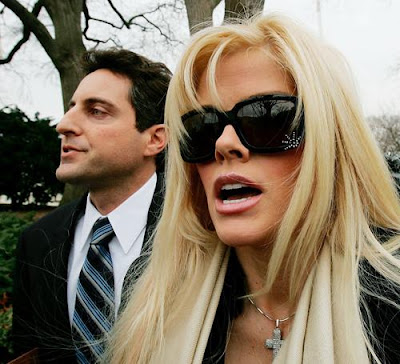 Los Angeles, CA—Lawyer and sometime paramour Howard K. Stern faces drug allegation in connection with drugs that may have lead to the deaths of Anna Nicole Smith and her son.

The allegations and evidence surfaced after search warrants were served on the offices of two physicians who were also charged with felonies, Sandeep Kapoor, 40, and Khristine Eroshevich, 61, who allegedly prescribed medication unlawfully to Smith, according to the L.A. County District Attorney's Office.

The conspiracy counts allege the three defendants conspired to provide controlled substances to Smith from between June 2004 and January 2007. They also were charged with "prescribing, administering or dispensing a controlled substance to an addict," among other charges.

It will be interesting to see how Stern can be part of a crime that involves medical prescriptions from doctors to a patient.

I once had to man handle Anna Nicole Smith. she was a real PIG. Story on above link.