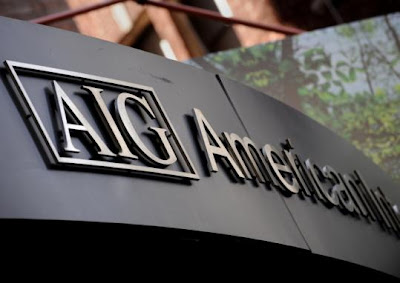 Washington, DC—Our politician’s pretend outrage is laughable when under our free market system of government AIG should have collapsed except for un-American government free market tampering.

There would have been no sky high bonuses or golden parachute severance packages for any of the architects of that failed company, just well-deserved unemployment. Other healthier American companies would have rushed and filled the void created by AIG’s demise.

When our politicians used taxpayer funds to bail out this mismanaged train wreck they also had to accept their existing contracts including golden parachutes for retirees and those bonuses.

Those who voted for the bailout deserve a severe beating from the American public not the bailed out executives of a company that should have been unceremoniously laid to rest.

It’s my fervent hope that every American politician that voted for the bailout and that phony stimulus package be tried for treason.
Posted by Paul Huebl Crimefile News at 3/18/2009 09:43:00 AM

You hit the nail on the head Paul. A bit more insight on why we, the tax payers, will have to fund these bonuses. Thank you Christopher Dodd.

Democratic Sen. Christopher Dodd on Monday criticized the bonuses given to executives of American International Group Inc. and suggested that the government could tax the recipients to recoup some or all of the payouts.

But it was Dodd who inserted language in the $787 billion stimulus bill that exempts the bonuses from taxation.

AIG lost $61.7 billion in the fourth quarter of 2008, the biggest quarterly loss in corporate history, and has received $173 billion in federal aid. But the company is paying $450 million in bonuses to employees of its financial products unit.

Dodd, chairman of the Senate Banking Committee, thundered on Monday: “This is another outrageous example of executives — including those whose decisions were responsible for the problems that caused AIG’s collapse — enriching themselves at the expense of taxpayers.”

While the Senate was constructing the stimulus package last month, however, Dodd added an executive-compensation restriction to the bill, which provides an “exception for contractually obligated bonuses agreed on before Feb. 11, 2009” — which exempts the very AIG bonuses Dodd and others are now seeking to tax, Fox News observed.

That amendment is law.

Incredibly, Dodd has now demanded a full briefing from the Federal Reserve and the Treasury on why “clauses weren’t attached to the four AIG bailouts to halt bonuses,” according to the New York Daily News.

Fox News also noted that one of AIG’s financial products unit’s largest offices is based in Dodd’s home state of Connecticut, and that he was the largest single recipient of campaign donations from AIG during the 2008 election cycle.

Meanwhile, the News is reporting that New York Attorney General Andrew Cuomo said his office will investigate whether the bonus payments are fraudulent because they were promised when AIG knew it wouldn’t have the money to cover them.