When Marina City And St. Patrick’s Day Was Cool 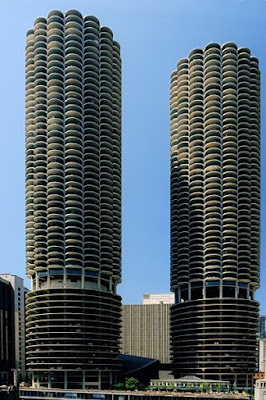 Chicago, IL—Today this city is a total mess. With the highest taxes anywhere and city services at an all time low the productive Chicago taxpayers have fled elsewhere. There are empty office and apartment buildings everywhere.

Today nobody can drive in and conduct business without dealing with parking rate tax extortion, lousy traffic and most conversations surround the effort to move out of the once great metropolis.

Today the city is run by thieves, the Loony Left along with slow-witted, middle-aged former Black Panthers. It was not always that way.

In the 1960s and 70’s the city was run by Mayor Richard J. Daley. Most Chicagoans including myself had a strong affection for modern Chicago’s father. The best kept secret is that Daley and those closest to him were what we’d today call Blue Dog Democrats. They were somewhat pro-labor and that’s where it ended.

The old man died and the best part of his son who is the mayor today ran down his father’s leg at the time of conception.

In the days of my youth there was no better place to be than downtown on St. Patrick’s Day. It was always celebrated on the 17th of March no matter what day of the week it fell upon. It was an unofficial holiday. No boss could get away with holding employees hostage so everyone could and did celebrate.

During the 1970s I was a happy lad with a great one-bedroom apartment at Marina City. That parade and every other began at my door on State Street, straight to Congress Street on the South.

Green beer was everywhere and the vegetable dye was dumped in the river turning it bright green. All the hot women turned into wild sexual predators. The experience was incredible. There were so many parties to attend and they were mandatory. We’d watch great dancers do the Irish Jig and watch many of our silly friends make total fools of themselves trying to learn to dance while under the influence.

Chicagoans all had wild sex with strangers, along with huge corned beef and cabbage dinners somewhere. That would last as they drank until it was time to hug the commodes. There were few police problems and a good time was had by all.

Your just bummed me out. Lifelong Chicagoan

The southside irish parade in the beverly neighborhood is bigger and better then the parade downtown.

The St Patrick's Day Parade runs along the lakefront on Columbus Drive now, in the middle of nowhere. It is a mere skeleton of what it once was. The Mayor destroyed another fun Chicago tradition.

I wish it was on Michigan Ave, it might be fun. The parade belongs on State St on St Patrick's Day.

It is so sad to see what Daley is reducing Chicago to. I think he may be clinically insane, Cuckoo, as he loves to say.

Your right. Welcome to the "new" Chicago. This guy is ruining what used to be a GREAT city. It's a shame. I used to love living here. I would spend all of my free time down at the lakefront or downtown. And getting there was no easy task because I lived on the far NW side. But it was worth it. Now I can't even remember the last time I was downtown or on the lakefront. Now, I can't wait to get out. And in 16 months that's exactly what I will do. I don't know where I will go or what I'll do. But anything has to be better than this place. And when I do go, I will never,ever tell anyone where I lived or what I did for a living. I want to start my new life with a clean slate.

To 9:49 pm Stop in at the Dubliner and meet the draft dodgers.