The Ultimate Empty Suit Is Showing His Lack Of Leadership 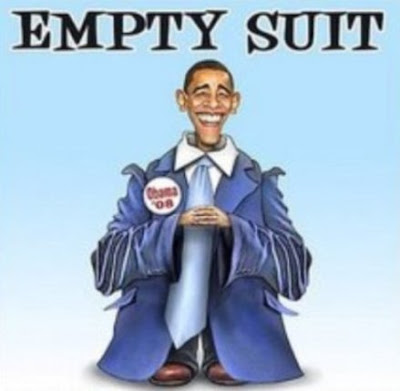 Washington, DC—The world’s Communist/Socialist elite put record sums of cash behind a man of little experience or substance. They subverted the election process with the help of willing media by creating a celebrity. If they wanted a celebrity Paris Hilton had more to offer.

Barack Obama has been faltering as he’s allowed the Loony Left in our Congress to load the so-called “Stimulus Bill” with billions of tax dollars for crap that can only destroy the free market as we know it. There is nothing for Americans that have paid taxes except a promise of ruin.

We have an economy that is depressed. The only avenue for remedy is less government and taxes. Instead they are manufacturing a full blown Catastrophe that will ultimately create a human holocaust.

As we make our currency worthless by over-printing and distributing it we will find ourselves bartering food, fuel and possessions.

Anger and frustration is never good for any country’s population. History has shown us that the only way governments seem to deal with that kind of unrest is by suspending rights and killing civilians.

I don’t have the confidence that our current government officials will avoid creating the conditions for a Civil War that will prove to be the most destructive and war this world has ever seen.

Chaos, Anarchy and deprivation are on the horizon because of Communists in our own government. Anyone that does not recognize that Obama, Reid and Pelosi are in fact Communists are total fools. Freedom cannot last as we travel into this new direction.
Posted by Paul Huebl Crimefile News at 2/06/2009 04:53:00 AM

Stock pile weapons and ammo.Be prepared to target harden your domicile.Ammunition will be ballistic "wampum".

We read much bravado about stockpiling weapons and ammo..just who are we going to be war-ing with. Poor, starving masses of blacks and mexicans..federal jack boot thugs..others??? Wouldn't it make more sense to arrest Haas, Kissinger, Obama, Kohn, Pelosi, Reid, Emanuel and other 5000 CEO's and politicians responsible for sucking the life out of the republic via the federal reserve bank fraud/pharma/no bid military contracts/black holes etc? Which Attorney Generals of which states are going to step up and start the purging process? What's that you say..no one will step up? So what is the answer Officer Paul?