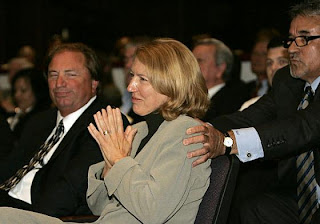 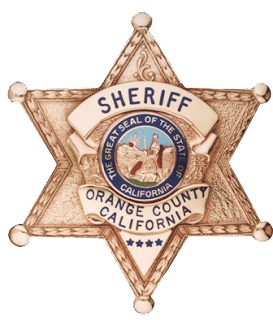 When Sheriff Michael Carona was accused of among other things selling permits to carry guns, he resigned and was replaced by a political appointee, Sandra Hutchens. Hutchens apparently has a strong distaste for the Second Amendment and anyone who supports gun rights.

Hutchens wasted no time pandering to her own gun rights hatred and began revoking existing permits and rejecting new applications. This is a sensitive issue in Orange County and a November 2008 hearing was held to study the permit policy of Sheriff Hutchens.

When the matter of concealed weapon permits and issuance policies came up before the Orange County Board, sheriff’s officials acting under Hutchens brought a gauntlet of intimidating cops to provide extra security at the meeting.

This sent an ugly message that Sheriff Hutchens feels the citizens coming to participate in their own government’s business are somehow dangerous.

Hutchens hand-picked political hacks like Assistant Sheriff Mike Hillmann, sheriff's spokesman Damon Micalizzi and Undersheriff John Scott spent eight hours at the meeting texting each other on their BlackBerrys while in the audience.

After a public records request by members of, Ordinary California Citizens Concerned with Safety recently brought about the release of 400 pages of the text messages made during the meeting and a firestorm of controversy began. The messages included a lot of insulting remarks aimed at gun rights activists and various members of the county board.

Other revelations that since came to light included the Sheriff’s officials use of installed security cameras used to zoom in on and spy on the personal notes of board members during the meeting.

Orange County supervisors and voters have learned that Sheriff Hutchens and many of her top deputies need to be shown the door. The blatant disrespect for members of their own community who simply want the right to protect themselves and families is absolutely shameful. These people need to be booted out and replaced by officials that will protect the rights and interests of the voters they have sworn to serve.
Posted by Paul Huebl Crimefile News at 2/04/2009 03:43:00 AM

your right, as a orange county man all of my life and in light of what has just happened to me when venturing into LA County when it comes to guns. Lets vote this B*$#* and her cronies out of office and get her but out of the OC and back to LA County with her kind

Not all Sheriffs want to disregard the most powerful asset for fighting crime, the target. Reportedly yesterday, Illinois is looking at concealed carry and majority of Sheriffs in Illinois support it.

Im sorry she's doing this. Although I can see the need for her to thourougly reexamine the gun permits for felon Michael Caronas cronies that he gave or sold CCW permits to.
But to decline new ones without a treu cause is wrong

This is just additional proof that California has to become a 'shall issue' state like 4o other states in the union. This will guarantee a fair process for all citizens and take the politics out of CCW.
As of right now every Sheriff can set his/her own policies and it is not uncommon to have two people with the exact same 'good cause' receive two different letters after sending in the application. One says 'approve' while the other says 'denied'.
Sheriff Hutchens needs to go and California needs to de-politicise the CCW program.

ILLINOIS: Illinois Gun Owner Lobby Day! Please join your fellow Illinois gun owners for the annual Illinois Gun Owners Lobby Day (IGOLD) on March 11, 2009, in Springfield! This is your opportunity to lobby your lawmakers directly and make a positive impact for all Illinois gun owners. Do not miss the largest gun rights rally and Second Amendment lobbying event in Illinois history! We need thousands of Illinois gun owners, hunters, sportsmen, and those who simply wish to defend their right to keep and bear arms to gather at the Prairie Capitol Convention Center. We will march down Capitol Avenue, rally on the Capitol steps, and then proceed inside to lobby legislators to make our presence known. There will be no mistaking that Illinois gun owners intend to stand up and speak out for our right to keep and bear arms in the state of Illinois! This will be one of the most important days of the year for Illinois gun owners!

Quite the interesting read. I find it amazing that the overwhelming evidence that an armed society is a polite society is so often ignored. I am even more surprised when it is ignored by the same law enforcement officers who have sworn to protect and defend.