One Month In Office And The Gun Bans Are Here 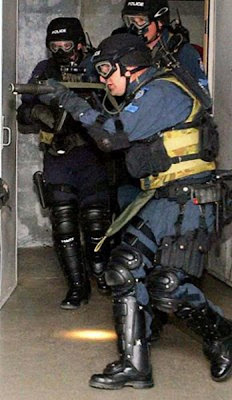 Washington, DC—President Barack Obama lied to America about supporting the Second Amendment. The Obama gun and ammunition banning agenda has been officially announced today by Obama’s top Nazi, Eric Holder who was the architect of the Waco Massacre.

Banning what they deceptively claim, are assault weapons and cop Killer bullets is at the very top of the Obama agenda.

What bullet can’t kill a cop? What arm can’t be used for an assault? Those terms have always been incredibly incendiary and intentionally misleading.

When the founding fathers gave us the right to keep and bear arms they knew war was waged with the deadly arms American’s were given the right to own.

Our emancipators never suggested that the people should have a lower grade of weapon technology than the government.

Currently our Marxists in Congress have the votes to pass whatever they want and will do this in violation of the Constitution knowing that it will take decades or longer to get another decision from our Supreme Court. Obama will do as he always has done and support any effort to ban guns.

These days our gun stores can’t keep firearms or ammunition in stock. The press apparently believes these are people trying to own these items before the Obama administration can ban them. That’s simply wishful thinking.

Guns and ammunition are being hoarded by millions for an all out civil war over hard won American freedom and Obama’s anticipated Marxist tyranny.

The anticipation of tyranny is over now as the War on American’s Liberty and Freedom has begun. It’s too bad that Americans will be fighting and dying on our own soil once again. There is a lot more at stake here than political differences of reasonable men about gun rights.
Posted by Paul Huebl Crimefile News at 2/25/2009 10:01:00 PM

We hold these truths to be self-evident, that all men are created equal, that they are endowed by their Creator with certain inalienable rights, that among these are life, liberty and the pursuit of happiness. That to secure these rights, governments are instituted among men, deriving their just powers from the consent of the governed. That whenever any form of government becomes destructive to these ends, it is the right of the people to alter or to abolish it, and to institute new government, laying its foundation on such principles and organizing its powers in such form, as to them shall seem most likely to effect their safety and happiness....

But when a long train of abuses and usurpations, pursuing invariably the same object evinces a design to reduce them under absolute despotism, it is their right, it is their duty, to throw off such government, and to provide new guards for their future security...

Like I said before, Paul, without the address of the corporate and political criminals..lone wolves out there can't start making appropriate contacts. A website with habits, schedules and addresses would most appreciated. thx

SOMEWHAT OFF THE SUBJECT:

MIKE SHIELDS IS YUR REP AT THE PENSION BOARD. HE HAS TAKEN A STAND ABOUT THE EMPLOYEE THAT IS DRAINING OUR FUND OF 88 THOUSAND DOLLARS TO GO TO LAW SCHOOL. WHICH ONE OF YOU BRIGHT YOUNG HARD CHARGING GUYS HAVE RALLIED TO HIS AID? WHEN YOU ARE RETIRED YOU WILL FIND THAT THE FUND IS BROKE BECAUSE YOU DIDNT WATCH YOUR PRIME ASSET.
GO ON LIKE SHEEP AND PRAY THAT ALL WILL BE WELL. THE FUND IS DOWN BY AT LEAST 1/3 AND THEY ARE GIVING FREE LAW SCHOOL TUITION TO SECERTARIES? Wake UP ROOKIES AND SEE WHAT IS IMPORTANT!!
GET BEHIND MIKE..HE CARES ABT YOU AND YOUR FUTURE! THE CLOUTED ONES ARE STEALING US BLIND!