Here is A Real Bailout for The American Economy! 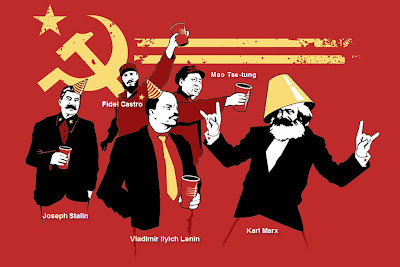 Washington, DC—The Bolsheviks have now gotten absolute power to destroy our form of government and way of life. Barack Obama and his merry band of Chicago Democratic Machine thieves are feverishly working to make us part of a new Global Communist government. The evidence is clear as they are nationalizing private enterprise wherever they can.

Government officials are bailing out every failing or crooked large business in sight. This is simply paying good money after bad.

The so-called stimulus program is nothing more than giveaways to their political contributors. They are simply printing money backed by nothing. That will never work and only create an inflation nightmare as the dollar becomes nonnegotiable and worthless.

My plan is simple. Since our jobs are vanishing at an alarming rate and these now idle people may not be absorbed back into the workplace we can give them real relief. The unemployed don’t need help from welfare and nanny programs. They do need help in starting their own new businesses instead.

America needs to offer any small businesses that employ 30 or fewer employees an end to paying any income tax. Instead of business sending their money to Washington they can reinvest it in equipment, supplies and wages for employees. This will create jobs and the kind of opportunities that made America great. This will generate jobs, consumer spending and fiscal health in America.

The Communists will hate this idea because it eliminates the nanny and lessens the need for more government control.

Small business has always been the backbone of America. Small business can rescue America if the government will let that happen.
Posted by Paul Huebl Crimefile News at 2/01/2009 08:03:00 AM

Keep up the good work Paul. These Chicago Democrats, Obama included, are now in charge and have some serious changes in mind for this country, and if allowed to get away with them, will forever change our way of life. We can't allow this to happen. This is not a socialist country, yet. Let's keep it that way.

Good plan, Paul but I would take it one step further and eliminate all taxes on businesses.

Think about it. If a small business with 30 employees wanted to hire more employees, they would be penalized by having to pay taxes.

If we all agree that jobs are a good thing for our society then why not make it easy for organizations to create jobs. That is unless you think government jobs are better than jobs in the private sector. Which may be what Obama and his merry band of Marxists think.