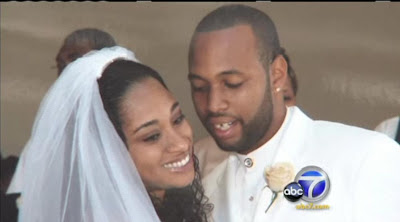 Compton, CA—After training and two years of police work under her belt it appears that CHP officer Tomieka Jones Lemons felt threatened enough by her husband to do the unthinkable. The off duty cop shot and killed her spouse, Marcus Lavar Lemons.

Through official Los Angeles Sheriff’s channels I’ve requested the 911 recording involved in the event along with descriptions of any injuries found on Officer Lemons. I also ask for additional information about the actual location of the shooting since the Sheriff’s press release is in conflict with some people who have contacted me claiming to be witnesses. I will post any information as I get it, right here.

We will have to wait for reports of the examination of blood and urine of both parties to surface. The obvious question was alcohol or drugs involved that caused violent behavior?

This whole mess will get the review of Los Angeles County District Attorney Steve Cooley who has a poor record of supporting self-defense rights of any armed survivors of violent attacks. Cooley may bankrupt this officer and her family just to let a jury decide whether this was a justified killing.

Even if the dead suspect was unarmed the issue of disparity of force would allow this young woman to use a firearm to ward off an attack.

I hope that the officer was smart enough to make no statements outside the presence of a lawyer. I see the need for an independent defense investigation to aid any defense lawyer instead of waiting for police reports to slowly filter through the discovery process.

WOW, she's pretty, and he's at best
mediocre. I can see where that could be a source of stress in that union.

I will never understand why SO much emphasis is placed on "looks"!! That has absolutely NOTHING to do with anything! I have know people whom society might label as "homely" or "unattractive" but were beautiful because of the goodness of their hearts. On the flip side, I have also known some that were aesthetically "beautiful" but had no conscience or soul! Your perception of "what one looks like" should NEVER cloud your judgement of one's guilt or innocence!!! SHAME ON YOU!