The Death Penalty And Human Behavior 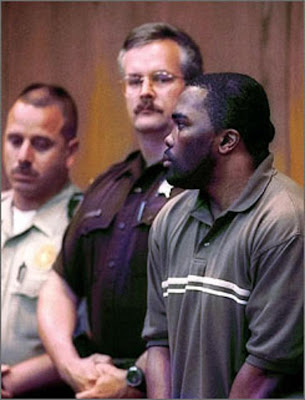 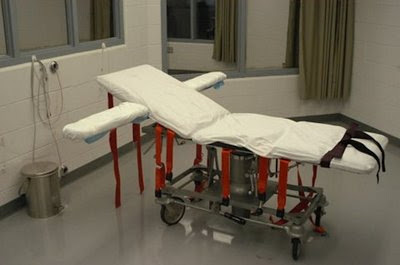 Jarratt, VA—There is something I could never understand about the death penalty. Why to the condemned always cooperate with their killers? In the case of hangings the hapless guests of honor actually climb stairs to help their killers get that job done.

I suppose that depression and guilt might rob a man of his natural instinct of survival. But there are many films of Nazis lining up civilians for firing squads, hangings and all forms of inflicting death and there’s never a hint of resistance.

I can’t imagine going out without putting up the fight of my life. I might feign a passive stance but my last act on earth would be trying to at least blind one of my killers for life.

If I was innocent my resistance would at least send a message.

Taking a docile person, chaining them up and strapping them down for an execution with a crew of guards is as cowardly an act a human can commit. That idea has always sickened me enough, that I have vowed to myself that I’d never get involved in an execution.

The unheard of happened when convicted and condemned cop killer was forcibly taken to his death at the Greensville Correctional Center.

Drug dealer, Edward Nathaniel Bell, 43 who was convicted of gunning down Winchester police Sergeant Ricky Timbrook during a foot chase a decade ago, has steadfastly proclaimed his innocence. Bell was put down like a bad dog yesterday but not without an ominous demonstration.

Bell's resistance was limited to thrusting away when the death chamber’s door was opened. Six prison guards overpowered Bell picking him up and strapping him down.

According to corrections officials the last words offered by Bell in the death chamber was, "To the Timbrook family, you definitely have the wrong person," Bell said in the death chamber, addressing the victim's family. "The truth will come out one day. This here, killing me, there's no justice about it."

I’m not clairvoyant and neither is any jury. Usually there are few if any living witnesses to these kinds of events and the life and death decisions made by our juries may well be flawed.

Resistance could be ill advised, when the consequence would be; pulled apart like warm bread for the next four days.

I like the Japanese method of not informing prisoners of the execution date. Each morning when the doors clang open it could be the date. That sounds like torture.

UNFORUNATELY THE PENAL SYSTEM IN JAPAN NO LONGER HAS CAPITAL PUNISHMENT, YOU MAY BE REFERRING TO THE FRENCH SYSTEM WHEN THEY USED THE GUILLITINE AND THE LOSER NEVER KNEW WHAT DAY HIS BY BY WAS GOING TO BE UNTIL ONE MORNING EARLY THEY OPENED THE CELL DOOR AND BUM RUSHED THE CONDEMMED AND PUT HIM IN THE POSITION ALL IN A MATTER OF 3 MINUTES OR LESS AND HE WAS HEADLESS,

You say there is no death penalty in Japan?

I guess you forgot to tell that to the Jap politicians. They hanged Tsutomu Miyazaki, 45 in June of 2008.

They should have asked you before they pot that nasty rope around his neck!

Old Testament/New Testament; a very ancient argument. As a woman I do not understand the horrific acts men believe they must commit for justice. I say "Put all the drug addicts on an island and allow them all their needs, just stay away from civilization."

Crimefile said...
You say there is no death penalty in Japan?

I guess you forgot to tell that to the Jap politicians. They hanged Tsutomu Miyazaki, 45 in June of 2008.

They should have asked you before they pot that nasty rope around his neck!

If your mother says she loves you, check it out!

The man was still found to be still guilty after numerous independent investigations ans appeals after his conviction.
One more killer gone. Pauls there's a big difference between murder and to kill.

Examine the word kill in its original Hebrew.

The death penalty is Biblical.
Perhaps your either an atheist or a smorgasbord believer?

Evidently you forgot about policing and criminals. they lie until the end.
Yes there have been mistakes made, however, thats why the death penalty takes so long.
Too bad,you have grown soft in your old age, but of course you wern't the most aggresive PO on the street either.

I have gone soft in my old age as you say. Is it soft or wise? I was very pro-death penalty in my earlier days. Experience has changed my opinion.

I learned a few things. We kill the wrong people sometimes. Witnesses lie far too often. Unfortunately that includes, cops, along with civilians that gather and process evidence.

I consider life in a cage far worse than death.

More importantly I don’t want that kind of power in the hands of Barack Obama, Nancy Pelosi or Harry Reid. They will find a way to kill those people that interfere with their Communist takeover just like Castro.

As for being aggressive, I have spent my time getting grilled at OPS.

CF is correct.I too,in my youth,was lock'em up and throw away the key,fry em!but no more.I believe in the death penalty in theory for the most heinious of crimes,but not in practical application due to human nature.

People lie,have agendas,develope personality disorders that can go undetected.
One of the biggest problems with folks that like to play detective is admitting they made a mistake.Cops are some of the biggest type A personalities and many are sociopathic.

The LIE must be protected at all times.

Crime file, as a Chicago Police officer, like I am, Im sure you caught guys with guns and drugs in their HANDS, and they still told you that it wasn't theres. Being caught re-handed wont stop them from lying about their innocense. Just b/c some mule told the family that he didn't do it, doesn't mean he didn't. One less waste of space to worry about.

I've said this before, but I fully support the death penalty ONLY in those cases where there is absolutely no doubt about the offenders guilt. This would require certain irrefutable evidence of guilt, such as DNA evidence placing the offender at the scene, video footage showing the crime taking place with adequate resolution to positively identify the offender, etc. Lacking that, then life in prison should be the penalty, just in case a mistake was made or someone had an agenda, like others have said.

I spent hours about this Japan/exucution/notification topic.

The prisoner is allowed half a day to contact family and make statements and then axe falls.

As to the proofs, that anonymous stated that should be necessary for an execution, the list is far more complicated and reaching than anyone has been able to compile yet. There have been mistakes, it is sad.