Americans Have Been Betrayed By Their Politicians 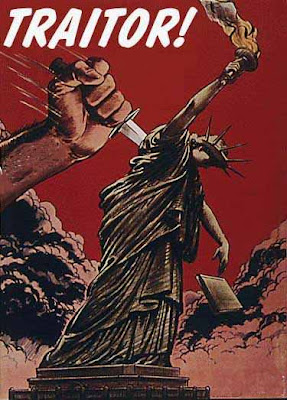 America and its way of life are on the ropes. Marxism is here because we failed to force the politicians to follow our will, the Constitution and existing laws.

The biggest tragedy of September 11, 2001 is that the Muslim terrorist controlled plane headed to kill our Congress missed its mark. We would have gotten what we really needed a new Congress.

Term limits are the only way to reduce corruption, waste and unresponsive government. Our career Congressmen have proven they are career criminals holding office for simple personal wealth building.

Americans have asked for a halt to illegal immigration along with the free education and medical care for all of Mexico and Central America. That’s no small part of what destroyed the economy. Congress has done nothing to slow down the trespassers or remove them from our soil.

These dysfunctional nations have only exported their poverty, drugs and violence.

We have asked Congress to allow drilling for oil. After lots of lip service and empty promises they’ve still done nothing.

The money involved with these two issues alone would have worked wonders keeping us strong and free. Congress has some other agenda and needs to be fired by the American people. They all need to be ousted.

The Republican Party has a lot of blame here too. They put up an irrelevant Leftist senior citizen that wanted amnesty for illegal aliens to be our president. They brought us George W. Bush who wanted to somehow sort good Muslims from the bad In Iraq. The result is we have wasted hundreds of billions of dollars and sacrificed thousands of American youngster’s lives for an impossible task.

Had we stayed out of Iraq we could have watched that country and their next door neighbor Iran control each other population. That would have been a much better solution to the radical Muslim problem in that region of the world.

The elected representatives in America are not loyal to the taxpayers. Their loyalty has been directed to illegal aliens and Marxism. Why should Americans continue to pay taxes to a government that is not on their side?
Posted by Paul Huebl Crimefile News at 2/18/2009 10:05:00 AM

I cheated the gas pump seller by 10¢. Normal busines, I assume.

The fed gov't takes 100% of my dollar and returns 60% for services. The overhead is too much.

Too bad the AmeriKan citizens/subjects didn't vote for the only conservative and true patriot in the race, Ron Paul.