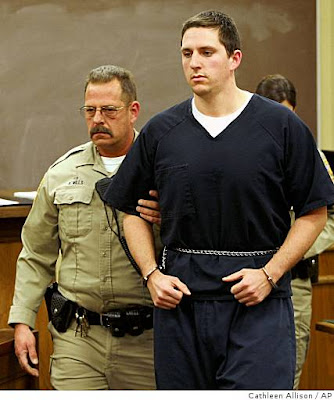 Mehserle was recorded on several cell phone video cameras shooting 22 year-old Oscar Grant who was face down in a prone position. Grant died from his wound.

The videos show Mehserle trying to put cuffs on Grant, and Grant appears to be struggling, when Mehserle suddenly pulls his service weapon from his holster and fires one shot into Grant's back.

This event polarized Oakland and has lots of very ugly anger spilling over. Small riots have broken out bringing about ove1 100 arrests in Oakland since the shooting. That anger caused Mehserle who had been getting death threats sought safety and refuge in Nevada.

The biggest question that remains unanswered if whether or not the act was deliberate or an accident. That question may be answered by a jury of Oakland residents.

The videos show Mehserle trying to put cuffs on Grant, and Grant appears to be struggling, when Mehserle suddenly pulls his service weapon from his holster and fires one shot into Grant's back.

The biggest question that remains unanswered if whether or not the act was deliberate or an accident.

Here's a thought experiment. Would I get the same definition of "accident" if, as a private citizen, I pulled out a gun and shot in the back an intruder or assailant who might have struggled with me but posed no threat to my life? I mean aside from claiming lawful self defense, would anybody say that drawing and firing was an accident and we should all keep this in perspective?

Tough job or not, the trend for separate standards for law enforcement and regular citizens is not going to have a positive impact on citizen support of police officers in the long term.

In response to your question. Here in crook county Illinois you probably would never be charged by the ASA. A police Officer on the other hand would definitely be charged.

I agree that there is a separate standard for Police and citizens but believe it or not the Police get hammered harder then a regular citizen by the courts these days.

At the risk of incurring the wrath of Glock lovers, I suspect that tricky light trigger may have a role in this. Gock users must never have a lapse in coordination or the results can be horrible. For police work I prefer the Sig-Saul or H&K with double action on the first shot,

In police work too often you have to struggle with several issues at once. I am convinced that the young officer was also distracted by the threatening and taunting nearby crowd. I would not believe in a million years that a trained, vetted cop would execute someone in front of a bunch of racially charges Black folks with cell phone cameras.

This is the kind of a case for Massad Ayoob who is an expert court witness in these kinds of happenings..

I read it hear first, 'slow is smooth, smooth is a fast draw'.
The double action for the first shot sounds safe. When I heard Glocks did not have a safety, I really did not know what to think.

Just a note, not for the blog comments.

Guys are always blowing their balls off or throwing the gun across the room doing the quick draw thing.

As you know, use of a firearm should always be a steadfastly deliberate action behavior.

I like the saying, 'slow is smooth, smooth is fast'.

Any how, have a nice evening.