Our Prisons Can No Longer Afford To House Inmates 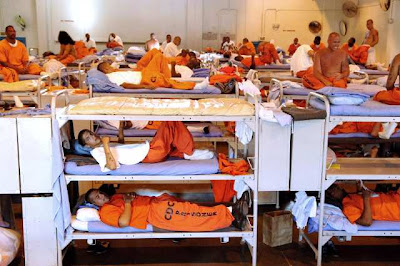 Nearly every state in the union has overspent tax money on things nobody needs or wants. We are slowly learning that politicians pour money into the business coffers for campaign contribution kickbacks rather than the need for the goods and services. They politely call that Pay for Play. It’s simple corruption.

California’s in a substantial mess for this reason. Now they are planning to hand out IOU’s instead of tax refunds in the not so Golden State.

At least one prison in Illinois is behind $20,000.00 in paying their power bill. The local utility company is justifiably threatening to shut off power there.

They are desperate to release prisoners. The problem is they want to release young prisoners that can be counted on to reoffend. They want to eliminate the parole supervision and cut whatever corners they can get away with.

There are a substantial number of really old offenders behind bars that can be released to make way for the dangerous young criminals with little or no risk.

I’m talking about prisoners older than 60 who have medical issues, exemplary prison records and who are locked up only because their crimes were so notorious. We are a vengeful society and want cop killers, child killers, and political assassins to quietly die in prison.

Examples of some of these inmates are cop killer Gregory Powell, of the Onion Field fame who is in his 80’s today. Then there is Susan Adkins of the Manson Family who is dying of brain cancer and has already lost one of her legs to the disease. In Illinois there is William George Heirens who has been locked up since he was 17 years-old in 1946.

Many people in prison committed absolutely horrible crime at very young ages and have grown old in prison. They’re too weak, too old and have lost interest in doing the things that put them behind bars.

When a person is in a wheelchair, diabetic, hypertensive, blind or has cancer in addition to being an advanced age it’s really difficult to continue on as a criminal. If a person no longer is a threat to society why keep them locked up while letting out those who are young, violent or are prolific thieves?

Releasing the old and infirmed inmates is far less dangerous than letting young criminals out on our streets.

Frankly if we’d only put more, Pay to Play politicians behind bars we’d not be in this mess. Instead we keep reelecting the pork peddling jerks to Congress and every other office as we whine about taxes.
Posted by Paul Huebl Crimefile News at 1/11/2009 04:49:00 AM

Hospitals, toll roads, and jails are where the wealthy are investing. Investing in vehicles where spending is mandatory.

Why don't the states screen prosecutions and reject those with laughably inadequate evidence of guilt instead of letting prosecutors play 'hero' and get advancement by prosecuting people who might well be innocent? $11 million to convict Scott Peterson and still no evidence of guilt - how is this a good use of taxpayer money? Why the blank check?