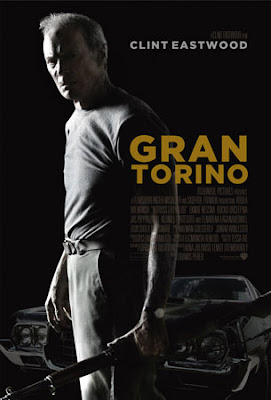 Westwood Village, Los Angeles, CA—Okay so I’ve been a Clint Eastwood fan all the way back to those Spaghetti Westerns of the late 1960s. How can an Eastwood fan not see any film he both directs and stars in?

Gran Torino is about a retired Michigan autoworker and aging Korean War vet, Walt Kowalski who just lost his wife. He’s now finding that he has to make some serious social adjustments to today’s new society. He is about to embark on adventures we’d all like to avoid.

Kowalski can’t seem to connect with his two adult son’s or their families. I met Kowalski many times in this life. He’s a composite of so many older military veterans that have returned to an ungrateful nation.

Along the way Kowalski has to deal with thugs in a way that made Eastwood’s films so popular. Torino offers a lot more to than vengeance and curbside justice.

Walt Kowalski has to deal with the next door neighbors who happen to be Hmong immigrants. There are serious clashes with ethnic gangs of hood rats.

This is an actor’s film instead of something loaded with special effects and expensive sets. It gets by on high octane acting alone. I see some Academy Awards in the future for these fine stars. Ahney Her, Bee Vang and Christopher Carley who all rock as their young characters help Kowalski reestablish his relevance as a person.

This film is one of Eastwood’s finest.

I agree CF,one of Mr. Eastwood best works.At first I thought it was going to be a Death Wish type movie but was pleasantly surprised.

based on your recommendation alone I will go see this flick (and the fact that he seems to be handling an M1 Garand...my favorite weapon hee hee)

Can you believe he looks that good at SEVENTY EIGHT YEARS OLD?

I look forward to seeing this movie, but I will have to wait for it to be available on rental or purchase, due to the fact that there will be assholes in the audience that will piss me off. I am planning to see Taking Chance at the theatre, and I guarantee if someone fucks up that viewing for me I will probably end up in lock up.

I saw it, and it's excellent. I know men like Walt, and Clint Eastwood looks and acts the part with such realism that I tended to forget I was sitting in the theater.