Is There Redemption For Mickey Rourke? 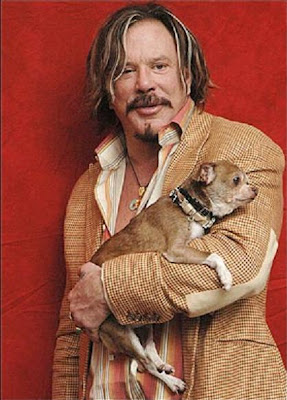 Los Angeles, CA--In the 1980’s he starred in, Angel Heart and Nine 1/2 Weeks. Then came one of my all time favorite cop films, Year of The Dragon where Rourke played a New York police lieutenant. Rourke was a gifted actor and star with unlimited potential.

Soon Rourke’s life became a total mess. Was it drugs, mental illness or both that sent Rourke’s life spinning out of control? Rourke underwent needles plastic surgery that backfired and disfigured himself even further with an unremarkable boxing career.

Rourke became a tragic, washed up failure with what appeared to be little hope. He was not to be counted out just yet. As luck would have it along came a low budget film and Rourke is back on the fast track to stardom. He’s been nominated for a Golden Globe and is a possible Oscar contender for his portrayal of Randy “The Ram” Robinson in The Wrestler.

At 52, Rourke still has plenty of useful life. I hope he can sustain and continue to bring real life to the characters screenwriters invent on paper.
Posted by Paul Huebl Crimefile News at 1/07/2009 07:27:00 AM

I just watched one of my favorite Mickey Rourke movies from the 80's, The Pope of Greenwich Village. Rourke was a great looking, talented actor who had the world at his feet with so much potential in the early 80's. It is sad how he ended up. I hope his demons are gone and he finds some inner peace and success.