Going Out In Very A Dramatic Kodak Moment! 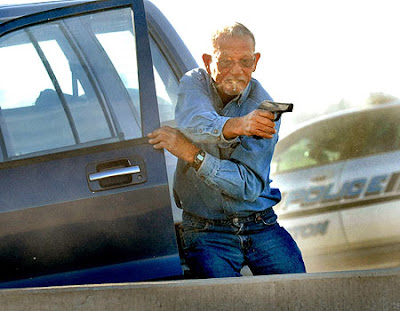 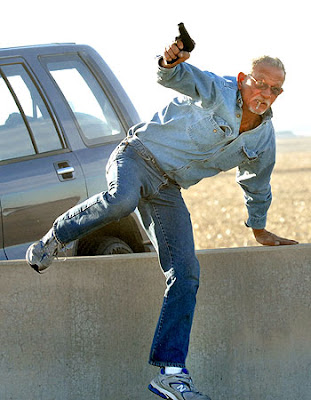 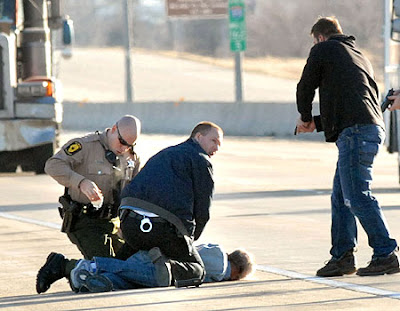 Normal, IL--A suspected bank robber led police on a wild vehicular chase and bailed out with gun in hand on Interstate 55 and I-74. An AP photographer got these news photos of a lifetime snapping away as police opened fire on Robert Sylvester, 57.

The deadly drama came to a climax as Sylvester was being chased by police after an armed robbery of a Bloomington currency exchange. Officers opened fire on Sylvester who had begun an armed assault once the chase ended. Sylvester is also suspected of at least four bank robberies. Sylvester later died from his wounds at a local hospital.

Darn what a cool dude.

He was calm enough to keep his cigarette in his mouth.

Had it been a cigar, he'd be my hero.

Can you believe that some of the liberals are commenting in the Pantagraph newspaper (a local central Illinois newspaper) that the cops should have waited before shooting because they think the gun was actually a BB gun? Others are also saying that this wouldn't have happened if there was more gun control. Unbelievable!

That's why we call liberals "moonbats".

Take a look at his trigger finger. He's got that trigger behind his knuckle. What a tube-steak. I'd be amazed with that technique if he could hit a semi point blank range. Thanks goodness that most bad guys are tactical illiterates.