Frightening Drug War Violence Is Coming To Your City 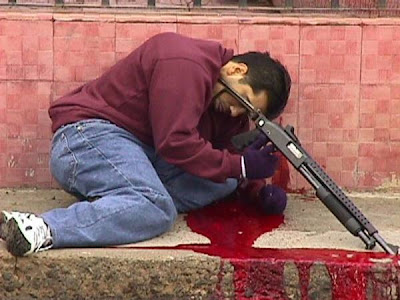 With our economy tanking in a hurry we still have the recession and depression-proof drug trade. Huge profits and insatiable drug appetites will bring even more entrepreneurs than ever.

American police will never be able to control the kind of violence as it’s been creeping inside our own fee society.

For the past two years I’ve been getting the most vile and ghoulish videos and pictures from the cops that read my blog. The images are that of unimaginable crime scenes. They show tortured, mutilated and dismembered corpses of cops, soldiers, rival drug runners, snitches, and various public officials. One video shows 24 decapitated bodies with heads everywhere. Needless to say I won’t be sharing those images here.

Ciudad Juárez, also known as just Juárez is a city of 1.5 million people. It stands on the Rio Grande, across the U.S. border from El Paso, Texas. This formerly peacful city had some 1,600 drug related killings in 2007.

We began the Drug War to prevent our own children from being able to get or get hooked on drugs. Despite our grand efforts there is no child in America who can’t get all the drugs they want. The only roadblock is the amount of money they can pay. Of course drug addicts will do whatever it takes to obtain the money to supply their habits. And no small part of our crime rate is fueled by desperate Americans who have become an underclass of career criminals as a result.

The actual cost for the illegal drugs is that of sugar, coffee or cigarettes. The huge profits only exist because the drugs are illegal. Our government and laws have done more to contribute to the incredible wealth of the Southern hemisphere’s drug lords. Of course American criminals have been able to make a handsome living from this trade as well.

When are we going to wise up? We can put these criminals out of business in a single day through legalization of all the drugs we have outlawed. The risk to our children would not be greater and in fact drug violence kills far more people than the drugs themselves.

We have no effective border protection.The War on Drugs is lie and big business for all parties.Its all about the dollars folks.

When will our government listen to this type of common sense and finally admit that the war on drugs is a lost cause. I don't think they ever will, and we will continue to throw money at this problem without making any headway whatsoever.

As a Chicago copper, I see the War on Drugs as nothing but futility.

Legalize the illicit substances and register with Uncle Sam if you want to use them. The US Govt. can sell them and tax the hell out of them.

Taxing drugs would be better that what we have right now. Taxing too much will create another drug war over revenue. That we don’t need. Put all the crooks out of business for good.

Do you mean we should legalize meth, too? Aren't some drugs too dangerous to receive the offical stamp of approval that legalization would convey? It seems to me that legalizing all drugs would be surrendering our morality to the very people we've been fighting all these years.

Of all of the dangerous drugs out there methamphetamine or meth is the easiest and cheapest to obtain and abuse. There is no way to control it beyond taking the profit out of manufacturing and selling that poison.

As for morality, we will have to find a better way to reinforce this than the failed Drug War.

One study comparing states' drug use rates and crime policies found that drug use fell when police focused on violent and property crime and actually rose somewhat when police focused on drug crime specifically. The authors concluded that the relationship of drug use to crime was more complex than popularly imagined; that some new criminals turned to drugs after getting new friends and a new source of income, instead of all having turned to crime to support their drug habit. So focusing on traditional crime happened to target the real problem cases among drug users, and sometimes even disrupted that crime-first cycle of drug use. While focusing on drug crime swept up nominally functional users as well as criminals.

As someone said, "the law of unintended consequences is a stone cold bitch."

J. Edgar Hoover oversaw some Suphreme Court cases against marijuana, it might take a constitutional amendment to legalize it.

"The law of unintended consequences is a stone cold bitch."

Prohibition was a failure,so is the so called war on drugs.

Paul: It hasn't worked in Great Britain, why do you think it would work here?

You have to be kidding me? Legalizing drugs of any kind only allows this to prosper. Do you think just because it is legal the mafia will abide by the rules? Who cares what happens in Mexico anyway. They are all animals. Their "army" are just paid thugs with no training. If they wanted to get to the drug lords (which they dont) they would train their soldiers to take care of business.