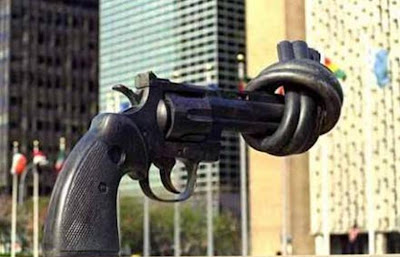 Chicago, New York and Washington, DC have seen yet another spike in their murder rates for 2008. All of these cities have virtual bans on handgun possession which has been only effective in one area, outlawing self-defense.

On the contrary, the further you are from those big cities the safer you are. Nearly every rural area of America has reasonable gun rights, low violent crime rates and government run by Conservative politicians.

Okay all you gun rights hating Liberals tell me the benefits, any benefits of the way gun bans help New York, Chicago and Washington, DC.
Posted by Paul Huebl Crimefile News at 1/02/2009 07:15:00 AM

Gun Control has provided a safe work environment for multitudes of criminals.

No burglar should have to live with the fear of getting shot while preforming his chosen profession, it's an occupational hazard that can be avoided by simply denying homeowners of their God given 2nd Amendment rights.

Only the police can be trusted with firearms. One study showed that they were able to hit their intended targets 30% of the time.
That means only 70% of their bullets hit something, or someone they did not intend to hit. No civilian could compete with that record.

Gee...You know...Maybe I should hang on to my guns after all.

Well, with the money they saved they could pay the Police more.
Oh, but they probably didn't do that.
Uhm, well, they could pay more in taxes to support those welfare programs.
No, sorry, I think they're receiving the welfare, not funding it.
They would be in a better position to afford the higher tuitions in private schools and give their kids better educations.
Er, but no, all the kids are in public schools anyway.
Uhm, better medical and dental care?
No, they're probably on some program to get that paid for by "the state" anyway.

See, I *knew* there was a good reason to ban guns!

Its really funny how the cities with the most stringent gun control have the most violent crime;yet the ones with the least amount and concealed carry do not?

Before HR 218 I had a CCW from Utah and Florida,officers before HR218 could not carry outside their home states,I found that funny.

Have you thought that the place can make the difference between the number of deaths. Big city's like that are almost prone to have more violence. Why don't you talk about some places that have gun bans and are lowering the crime and death rate and if you can't find any why don't you at least mention smaller city's and places and stop being so biased.

Your logic is broken and beyond repair.

1. Knives and other weapons are effective weapons that take as many lives as guns. Banning guns does not reduce murder because there are unlimited other tools to do the job. Guns are more effective for self-defense than other weapons. In an offensive situation using surprise, guns offer no real advantage.

2. Stab and cutting wounds are far more likely to be fatal. Bullet wounds in soft tissue self seal reducing blood loss and provide much more time to obtain medical treatment. Cutting leaves the tissue wide open and a human can bleed out in as little as 45 seconds. 65% of all shooting victims live even with multiple wounds. The odds drop dramatically for cutting and stabbing victims.

3. Gun laws and bans only work against the law-abiding that obey them. Rapists, robbers and killers ignore all laws.

4. Gun bans allow for genocide and eliminate the need for popular elections to select leaders of governments. That’s why the founding fathers made sure we all had the right to keep and bear arms.