There Will Be No Impeachment Over Blogogate. 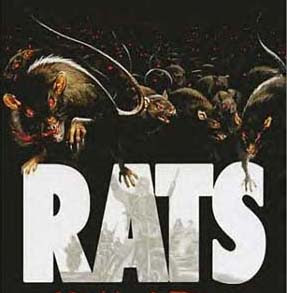 Springfield, IL—The Barack Obama Whitewash is in full swing and US Attorney, Patrick Fitzgerald is currently in the Tank for the President-elect. My sources in Chicago claim Fitzgerald is now looking out for Obama’s interests. The deal has already been made.

Now Fitzgerald has made quite a mess and before it’s all over whistleblowers within his own office may spill the beans. The only way out is for a real sweetheart deal where Governor Rod Blagojevich, shuts up, resigns and escapes prison. No hearings, no trials and no risk of exposing Obama or his minions to sunshine.

The lawyers for Tony Rezko are also in on this deal making that’s not about cooperating with testimony but silence.

Defense lawyer Ed Genson already knows that Fitzgerald does not want the information Blagojevich can provide about major corruption that extends straight to Obama and several members of his team. The goal is to discredit and silence Blagojevich while getting him out of the way.

Illinois cannot impeach anyone without affording them Due Process under our Fifth Amendment. That means Blagojevich has the absolute right to subpoena witnesses, the right to confront and cross-examine accusers. Blagojevich also has the right to all related e-mails; phone records reports prior to any hearing. Despite posturing to the contrary they know that.

You are so on the money with this posting.

LIST OF PEOPLE SO FAR BEING PROTECTED FROM SUBPOENAS

The first reason why none of these people even want to be subpoena is because they will be UNDER OATH when testifying.

But why would the U.S. Atty. Patrick Fitzgerald not only request that Gov. Blagojevich's request for these subjects to be subpoena be denied but also state it would jepordize the current criminal case against Blago?

Something is very strange here. First you have Fitzgerald jumping the gun and exposing this investigation against Blago and rushing to indict him before Blago even ever accepts a bribe or complete an act that he was bribed to do.

There can only be one reason why this is all going on in my mind. U.S. Atty. Patrick Fitzgerald was protecting the first elected black president from participating in a criminal act that the wiretaps were reflecting was going to occur. Plain and simple. U.S. Atty. Patrick Fitzgerald fully knows what would of happened if Barack Obama was indicted and never sworn in as US President. Massive urban rioting that would of ran into billions of dollars of destruction across America.

There is no other reasonable explanation for all of U.S. Atty. Patrick Fitzgerald actions in this criminal case. The Feds and FBI never expose an investigation till they have you committing the alleged criminal act in full on wiretaps or video surveillance. Unless a course their is a planned murder involved. And even then the Feds have fucked up in the past and allowed people to be killed during an investigation. Sometimes by negligence and sometimes by looking the other way.

The world famous Shave checking in there. I am impressed. But I also agree with crime fighter and shaved. The fix is in. And Obama is in this as deep as Blago.

What is known about Patrick Fitzgerald that would indicate he is such a corrupt stooge?

That hardly seems fitting with the obvious history that I know about him.

There is no way no how that Obama could come out of that cesspool called Illinois and be clean. The entire political system is corrupt throughout the state. Has been for years. The problem is, that as the first black president-elect, he cannot be brought down no matter how much evidence might appear against him as this would cause more urban renewal in the form of burning down inner cities. Certainly, the vast majority of the country wouldn't care that much, as it would involve a MINORITY of the population, but media would make it seem to involve the entire world burning because of the corruption he swims in. Therefore, the feds pull the trigger early on their investigation,sweep the mess under a rug, and walk away whistling in the dark.

Spot on CF and Shaver.Bravo!!