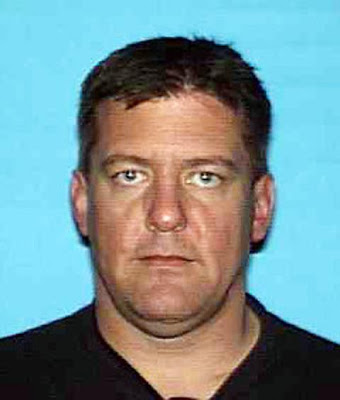 Covina, CA—The pristine background of the Santa Claus Killer now known as, 45-year-old Bruce Jeffrey Pardo provides no clue for his deadly commando assault on his ex-wife and her family.

Pardo was a well-educated engineer who regularly attended a Catholic church, lived in a nice home, had friends and a faithful dog. People who knew Pardo never saw a hint of the anger and desperation leading to the unleashed terror.

Pardo did not need to use his guns since his homemade racing fuel fed flame thrower quickly reduced the home he attacked and people inside to mere ashes. Police say that Pardo himself suffered third-degree burns from the back-blast. His Santa suit actually melted with his skin.

Divorce is difficult for anyone and being a Catholic carries addition problems because the church does not accept divorce. There was no fight over children but the wife got the dog in the settlement and that is no small loss.

Pardo did lose his job but was living the American dream and would soon find new employment.

This event is unlike anything I’ve ever seen. This is beyond rare. I’ve seen lots of senseless violence but in the vast majority of cases there are signs and signals. When people hurt they complain and if the stress becomes too severe for them they act out in far less destructive ways.

We will have to wait for two things, a total drug screen and a psychiatric autopsy on Pardo. I wonder what if anything could be done that would have allowed this fellow to move on with his life and perhaps even find a new and more desirable wife then the one who left him? What cause a rational and successful man to this kind of ending?

We know so little about insanity and the actual culpability some killers. I believe that nobody deserved to be in this holocaust including Pardo himself.

The thin line between love and hate. When it snaps, sometimes it REALLY snaps! A cooling off period for flamethrowers would not have worked as he made this one himself, supposedly. The eight year old will quite likely have serious head problems for life, and that is a shame. If only he had lashed out by offing himself, but the hatred must've been intense in him. May they all find peace.

Women can make some guys go nuts and snap.

Insane? nooo..except for shooting the 8 year old, the guy is a hero. Rambo, Hanibal Lektor and Pale Rider all rolled into one. Too bad he didn't get the divorce attorney and judge. When will the pendulum swing to the enter and guys quit getting reamed? Flame thrower was a nice touch.