Rod Blagojevich will Bring About A Political Bloodbath 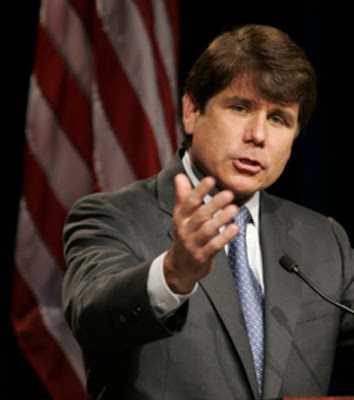 Chicago, IL—Today veteran criminal lawyer Ed Genson had a sit down with a client who could unleash the Gates of Hell. Genson has been practicing criminal law for more than 40 years in Cook County. Genson knows the ropes and will do his best work for Illinois Governor Rod Blagojevich provided that he ponies up a huge retainer.

I know Genson and have been examined and cross-examined by him in several criminal cases while I was a cop. Everyone always underestimated his ability. He and his long time partner Sam Adam are gifted litigators from Hell.

Patrick Fitzgerald, the U.S. Attorney for the Northern District of Illinois can potentially make orphans out of Blagojevich’s children. Fitzgerald has the goods on the Illinois First Lady too. With both parents in prison the family damage is mindboggling.

Blagojevich and his wife have no choice but to implicate everyone they can. There is no question that Blagojevich has the goods on every major Democratic Party politician in Chicago including President-elect Barack Obama. You can’t hold any major position in the party without selling your soul to the devil.

Being slated for major office is being a, Made Man by mob standards.

Chicago’s organized crime begins and ends with the Democratic Party power brokers. Fitzgerald is in danger over this prosecution and is a likely murder target.

Blagojevich himself is in mortal danger because of the power he now holds to destroy the lives of other crooked politicians. Blagojevich will be better protected if he sings than if the criminal cabal has to speculate he might. The Illinois State police bodyguards will vanish as soon as Blagojevich is out of office.

Let’s argue and say Blagojevich can’t bring down the President-elect someone else he snitches on will. The rats are already biting each other and this cancer will spread faster and deadlier than any we’ve seen before.
Posted by Paul Huebl Crimefile News at 12/13/2008 06:43:00 PM

Email ThisBlogThis!Share to TwitterShare to FacebookShare to Pinterest
Labels: Crime and Courts, Obama

Gensen represented a neighborhood buddy of mine who delivered some coke
years back for a coward, dirty tavern
owner. Well, this was a setup and the coke was delivered to the Police.
Gensen wanted to know right off the bat if my friend wanted to cooperate.
When he refused,Gensen took the case.
My friend got 6 months instead of 7
years; it was too bad of a case to get off completely.
I agree,Blago(and Rezko)are in mortal danger and should be in protective custody. The back of the machine needs to be broken now!
I too, was stationed in Germany, in the mid 70s ,and never thought the "Wall" would come down in my lifetime; perhaps there's hope for Chicago...............