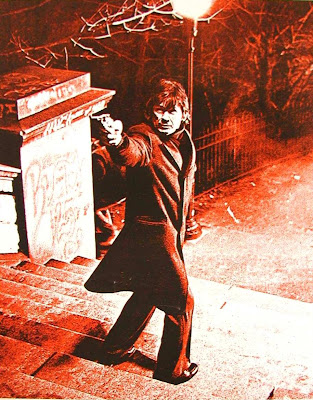 Oak Park, IL-This quiet, progressive and wealthy town was the location of an armed robbery. I can’t understand how that could happen since the Village of Oak Park politicians have done their best to make laws banning guns for simple self-defense.

As one man was putting gas in his car, two other men decided to try and rob him of his leather coat. Instead of handing over the coat the intended victim drew a gun and shot one of the robbers twice and quickly left the scene. Of course leaving the scene of the shooting is not a crime anywhere in America.

The wounded stick-up man had some very nasty but non-life threatening injuries. So far police have arrested nobody but a dragnet has been cast for the intended victim.

I just hope the lucky fellow who survived the robbery attempt is smart enough to remain absolutely silent and demand a lawyer if they ever catch up to him. Thankfully this fellow put his own life at a higher priority than blindly obeying unconstitutional Illinois gun laws.

The spirit of Paul Kersey lives in Oak Park! This is yet another bedtime story with a happy ending!

I like the ending n outcome to. But the vict may get screwed in the end. Unless he can convince a trigger happy DA and jury that his life was truly in immediate danger.

We know his jacket was.
Had he called the police he might have looked like the hero. It would have been his word merorilized against two thugs later.

But the police will now be looking for the shooter once the hospital threating the wounds called the police.

A good but sad story.

Calling police or trying to convince police or prosecutors is the last thing someone who used justifiable deadly force should ever do. That is really a stupid idea!

You say NOTHING AT ALL to anyone but your lawyer! You let your lawyer handle it. If you don’t have a lawyer, shut up and wait for one to be appointed by the court if you’re arrested.

Would the NRA get involved since this *should* have been a legal act?

If it were me, I'd be Emailing crimefile for the name of a good attorney.

GOOD, for any criminal that gets a surprise roll reversal. There should be more vigilanties out there.