A Goddess Has Died, Bettie Page was 85 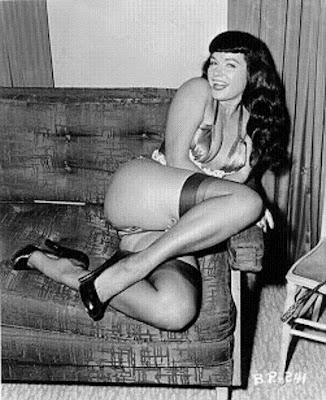 Los Angeles, CA—1950’s pinup queen, Bettie Page has passed away. Page was hospitalized here for pneumonia more than a month ago. She suffered a heart attack as she was about to be sent home. Paige never regained consciousness and died nine days later.

Page’s sensuous photos covered the globe in the 1950s when really tame material was considered pornography under the laws of most states. Page did not get her share of the vast financial reward for her images that were constantly being republished everywhere despite copyright laws.

Page was an original Playboy Magazine centerfold and her images were carefully hidden under the mattresses of teenage boys everywhere.

Page was really more like the girl next door rather than the hot sex kitten her picture poses demonstrated. Page seemed to be a victim of exploitation never winning the legitimate stardom she deserved.

Actress Gretchen Mol did a bang up job of playing Page in the movie, The Notorious Bette Page. If you’re a fan of Page like I am seeing that film is a must.

Update: 11/16/08—Westwood Memorial Park was the location of the memorial service and internment of the pinup legend. Present was Playboy founder Hugh Heffner, the famous stripper Tempest Storm and a legion of young women inspired by Page.

I was somewhat concerned Page would not get the prestigious resting place she deserved. I worry no more because Page has a great space yards away from Marilyn Monroe and scores of other entertainment stars who have made the world a better place. I will post pictures whenever her grave marker is completed.

When Hugh Heffner learned Page was having financial trouble and mental health problems he jumped in and rescued Page. I suspect he also contributed to her high priced final piece of real estate. Hef has demonstrated he has both heart and some real class. 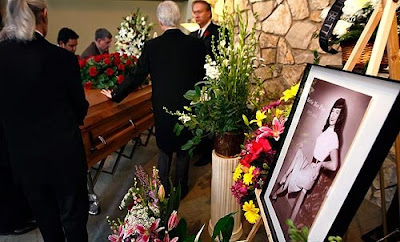 Not only were her pictures all too often used without payment or her consent, but a number of designs of bikini swimsuits which were her own work were also stolen from her.

Sad to think this era has ended - she was never vulgar, even when naked. Sad also to think that a near perfect body and face were not matched by her mind, as she suffered from mental illness at times during her life.

I wish her well on her final journey.

Betty Page was exploited and later suffered tremendously, throughout here life, with severe depression and issues of guilt. She renounced exploitation, via pornography and became a born Again Christian.

Page made it into a couple of mainstream movies too, right?