Blago Will Fill Senate Seat And They Can’t Stop Him! 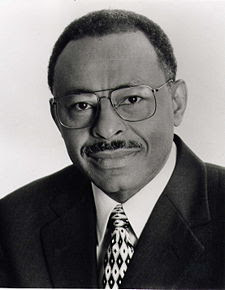 Springfield, IL—I was wondering just when this would happen. Rod Blagojevich is still the governor and his power has not been interrupted so he will do exactly what the law allows.

The surprise is he is appointing a somewhat Conservative, old guard Chicago Democrat to the seat. The lucky winner is former state Comptroller and Attorney General, Roland Burris.

My own experience with Burris is that he has class and comes from the George W. Dunne, Richard J. Daley side of the party instead of the ultra Left Wing. Burris is however a reliable team player who has avoided scandal. For a Democrat he’s not a bad choice.

Blagojevich is having too much fun thumbing his nose at Barack Obama’s people and the US Attorney. I’m convinced this appointment is unstoppable. The downside for Burris is he may suffer the Blagojevich taint in the long run.

Currently Burris is on the roster of the Chicago law firm, Gonzalez Saggio & Harlan LLP.

Of course if Illinois held an Election right now a Republican would win that seat.
Posted by Paul Huebl Crimefile News at 12/30/2008 10:44:00 AM

A class act you say? I say guess again. I'll never forget the time I saw him dancing like a zulu warrior on the roof of a car shouting in his best ghetto accent at an anti-police march in the 025th district. Clas act my a.., well you get the idea.

I hope that never happened. Anything is possible. I am dismayed that his first vocal supporter is that total racist POS, Black Panther Bobby Rush.

Press conference;
REPORTER: Could the fact that your firm contributed $14,000 to Blago have anything to do with your appointment?
BURRIS:How much did you say? $14,000? That's a lot of money. I didn't think we had that much to contribute all over let alone just to the Governor. I'll have to look into that. $14,000?

You couldn't make this stuff up. One of the funniest press conferences I have ever seen!
Our politicians put the "ILL" into Illinois!

It happened Paul. Up until that time I didn't know too much about the guy. That event however told me all I needed to know about him.

We are a nation of laws, not men. I personally never cared for Blago and never voted for him. As an Illinoian, I'm ashamed of him. In spite of this, the Illinois Legislature failed to pass legislation to remove the power to appoint from the Governor....probably because they were afraid a Republican would be elected.

We in Illinois deserve a Senator representing us and I believe Burris is a good choice. He meets the constitutional requirements for the job and I don't see how Harry Reid and his cabal of asshats can refuse to seat him in the Senate.

And as a final note: I still believe the Governor should retain the power to appoint a Senator in the event of a vacancy. The cost of a special statewide election for something that happens so infrequently isn't worth throwing out the baby with the bath water.

The last person to be appointed to fill a vacancy was Ralph Tyler Smith who served for one year. This was in 1969 and he wound up losing to Adlai Stevenson in the next election. Leave the law as it is.

I also think that Roland Burris is a racist douchebag. One day back in about 2003, I was working a detail in a Chicago Baptist church off of the Dan Ryan where IDOT people were meeting with community members. I was standing in a small vestibule with three other coppers, who happened to be black (I'm white) and good ol' Burris comes walking in and immediately puts on this big grin as he starts shaking hands and exchanging pleasantries with the other three coppers. When he gets to me, his hand goes down, the smile vanishes and he walks past me without a word. It was a blatant and disgusting "in your face" act of racial prejudice on his part. The three black cops all looked at me and shook their heads, cause it was that obvious. Roland Burris can kiss my white azz.

Burris Could Be Illinois’s Senator, But Was He a Good AG?

Burris also may be forced to say why he didn’t do more to address wrongful convictions in his state while he was AG. In this archived column, a Tribune columnist recounts that in 1992, Mary Brigid Kenney, the assistant AG whom Burris had assigned to fight the appeal of Death Row inmate Rolando Cruz, sent Burris a memo identifying numerous errors in the investigation and trial that had put Cruz on Death Row for the 1983 murder of an 11-year-old girl.

According to the column, Kenney’s memo concluded:

I cannot, in good conscience, allow my name to appear on a brief asking . . . to affirm this conviction.” Rather than re-examining the case, Burris took Kenney off it. She then resigned with a stinging letter to Burris. “I was being asked to help execute an innocent man,” she told him. “Unfortunately, you have seen fit to ignore the evidence in this case.