The UK’s Bizarre Hatred Of Self-Defense and Weapons 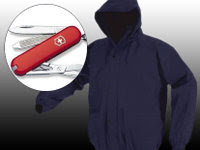 I have no desire to travel to the land of George Orwell’s nightmares for any reason. Cameras are everywhere, in a land that disallows self-defense for simple survival. The Brits are obsessed with violence, knives and guns.

In the UK they’ve created a predator’s Utopia where every potential rape, robbery or homicide victim is absolutely unarmed and helpless. They have made total social outcasts of anyone who suggests self-reliance against criminal assault. The socially acceptable to react to attack is to lay down and die.

A recent sales gimmick here hoodie style sweatshirts are being sold with a small Swiss Army knife has become an adman’s dream. The sales effort garnered world-wide attention and exposure. The endless and shrill condemnation by the “sensible” crowd is selling the hoodie/knife combo off store shelves.

The Brits are suffering from some strange mass mental pathology. They must really believe their bans on weapons are somehow effective in controlling crime. Any real effort at statistical analysis would debunk those theories.

They must learn to punish violent behavior rather than weapons possession. Weapons are the only way people have to stop assault, rape, robbery and murder.

Training, concealed weapons permits and handguns will help the UK reduce violence and crime. The UK’s politicians have to learn their own law abiding citizens are a real resource to trust with the tools of self-defense.

The Brits will argue they allow self-defense but that ends when any weapon is used to ensure survival.

the whole of the UK is being over-run by gangs of teen thugs--what in the world are they teaching these kids in school. I've read comments in the papers there--some blame the years of ever increasing socialism while the labor party was in charge and Gordon Brown is sadly up to the challenge to change things.