A Look AT L.A. TV News Behind The Cameras 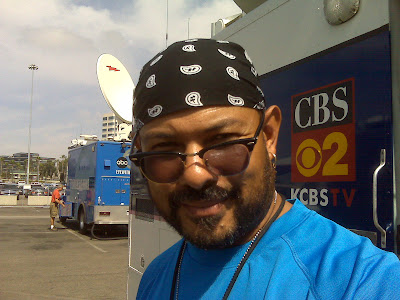 Los Angeles, CA—The combined forces of KCBS-TV and KCAL-TV provide a lot of local news, sports and weather. Television news is in big trouble everywhere for their failure to change with the times and give their audience what they really want. Perhaps this combined L.A. news operation should follow the lead of one of their own photographers to gain viewers and turn a profit.

On the side, Photojournalist Bryan Frank runs a hot blog called, beFrank that promotes his employer’s product. Frank provides thousands of images and a look behind the creative forces of the news. The beFrank blog tops the multimillion dollar effort of Frank’s employer. beFrank provides an informative and visual treat for its visitors.

I never could figure out why TV news nearly always hides what’s behind the cameras. Viewers should also see the magnitude and importance of a story by showing the people and resources covering the event.

TV photojournalists fill all kinds of roles. They are the ones that get the pictures and sound on the air. They lug around heavy equipment, light, shoot, edit and make sure the audio stays acceptable under the most hostile of conditions.

The Satellite and Live trucks are the TV studios of the field. Shooting, writing and producing news on the fly is the way it’s done. It’s the photojournalists that make sure all that equipment is working and the efforts make air.

Along the way photojournalists train new reporters how to look and act natural during their stand ups. That is a learned behavior and most of the award winning big time reporters got their reporting chops from these lesser known photojournalists.

The photojournalists are always where the action is as they compete to bring us the news. These artists are too often overlooked as they follow the marching orders of far less talented producers.

Bryan Frank and bloggers like him are the next generation of news delivery in America. Some wealthy media investor should fund Bryan Frank and let him run wild and create the largest Southern California news giant on the Internet. The perfect mix of print, photos, audio and video just can’t be achieved on television. I’d love to be a field producer for anything Bryan Frank is involved with.

Here Here! beFrank's look at local LA TV is far more intriguing than the celebutard fodder that passes for news these days. Somebody give that man a production deal!

It's so cool to bump into friends when I'm surfing around the internet. Thanks for the shout out. I'm just glad life is starting to become interesting again after so many months of training boredom.

It's always an honor to be in the company of good people.

Production deal? Nah, just give me a my cameras and a good story to cover.