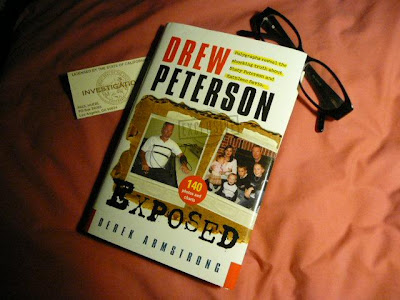 I had written about the sensational case of the retired 30 year veteran of the Bolingbrook, IL police department and his young wives on this blog.

Author Derek Armstrong tackled the whole story, trying to get to the truth of the missing person case of Stacy Peterson that has captured the imagination of those true crime buffs from coast to coast.

I’m told that Peterson and his lawyers have not collected a dime for their cooperation with the author or publisher. Drew Peterson’s life was opened for close examination. Peterson agreed to and took polygraph examinations after signing liability releases for examiner Lee McCord. The releases are common in the industry protecting the examiner from any claim of negligence or even intentional misrepresentations.

I learned that Drew Peterson submitted to the polygraph examinations against his lawyer, Joel Brodsky’s advice. Peterson obviously wants his life back and agreed to apparently unlimited interviews with Derek Armstrong.

Nobody asked me but I think granting interviews and submitting to polygraph examinations by a person named as a suspect in a presumed homicide is insane.

The book gives us a biography of a somewhat ordinary guy you’d find in any police department. Cops are known to be party animals, lousy husbands and too often philanderers. Peterson seems to fit in this mold. Along the way Peterson has managed to raise his children in a loving and responsible manner.

Once Stacy Peterson went missing, the media dropped by and have yet to leave. Tabloids, bloggers, regular newspaper and TV news organizations made this mystery famous. Peterson’s street like his life has turned in to a circus of the absurd.

The sad part of too many high profile cases is that they draw profiteers and publicity hounds. Wannabe heroes are everywhere. They want to inject themselves into the story as a way to gain new found fame in their otherwise dull lives. Such is the case here where the help provided by these gadflies created serious conflicts in the obvious misinformation about the investigative timeline they provided police.

Not surprising Drew Peterson has gained new “friends” and people who threaten him in the form of a strange assortment of letters from crackpots who obviously don’t have a life. Some of those were reprinted in the book and give insight into what this kind of infamy brings.

In 1947, this form of truth detection was brought to us in Chicago by the pioneers of the ultimate truth detection machine, Leonarde Keeler and a lawyer named John E Reid. It was a simple play on centuries of investigator’s tricks, such as making a suspect hold his finger still in a bowl of water during questioning. If the water moved the suspect was telling a lie.

Using blood pressure, respiration and skin conductivity monitoring the examiner convinces the suspect that he cannot hide the truth. The reality is that if the suspect believes the examiner’s claim he will confess in hopes of leniency in court. The ploy works well to this day as the ignorant spill their guts. The testing or results are never admissible in court but the confessions gained by examiners have put many a man on Death Row.

There is no way a modern police officer with 30 year experience would fear a polygraph. I blow off Peterson’s testing as nothing more than an age old effort to gain a confession. I won’t blame Lee McCord for calling Peterson a liar. That is the accepted technique and he’s got a signed release from Peterson.

As for the book, it’s interesting and those crime buffs and armchair detectives will eat it up. The book was well researched and pulls no punches and at the same time was fair.

By the way I did not escape scrutiny here in that I’m mentioned several times and there is a least one screenshot of this blog.