Why The McCain-Palin Ticket will Win 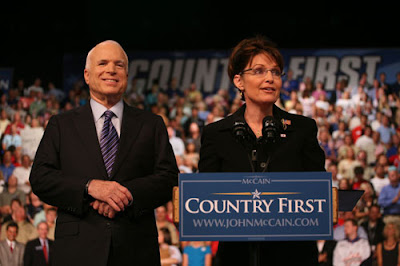 I was going to sit out this election because I could not hold my nose long enough to vote for the too Liberal John McCain. That all changed with the addition of Sarah Palin to the ticket for me and millions of conservatives. For the record, real conservatives have never been fond of either president named Bush.

1. American Jews rightfully don’t trust or like Obama.
2. Too many Hillary Clinton supporters have bailed from Obama’s campaign.
3. For a change, real conservatives will find their way to the polling places this election with zeal.
4. Obama can never win without those Americans he hates because they, as he says, “cling to their religion and guns.”
5. Michele Obama presented herself as an anti-American racist.
6. People are learning more everyday about Obama’s personal corruption inside Illinois Democratic politics.
7. Americans want real change, not lip service and empty promises.
8. Simple anti-Black bigotry will bring usually agnostic Democratic voters to the polls to vote against Obama.
9. The pro-Left media giants have lost their propaganda powers to the free speech on the Internet just like their audience and readers.
10. Barack Obama is uniquely unqualified to be President.

Obama can’t overcome these issues that will only be more evident as the election draws near. This race won’t even be close.
Posted by Paul Huebl Crimefile News at 9/02/2008 09:19:00 PM

I could not agree with you more!

Keep up the great work

YOU ARE CORRECT SIR! ADD TO YOUR MAGNIFICENT LIST OF WHY O=BOMA WILL LOSE THIS COMMENT PLEASE; O-BOMA CLAIMS HE WILL CLEAN OUT CORRUPTION IN GOVT. AND LOBBYISTS, ETC. QUESTION IS; IF O-BOMA IS SO GOOD AT FERRETING OUT CORRUPTION WHY CAN'T HE FIND IT (CORRUPTION) IN CHICAGO WHERE HE LIVES? EITHER HE'S A POOR INVESTIGATOR OR THERE SIMPLY IS NO CORRUPTION IN CHICAGO. I SWEAR IT HAS TO BE THE FORMER NOT THE LATTER. O-BOMA WON'T UPSET THE APPLY CART OF CORRUPTION IN CHICAGO BECAUSE HE'S INVOLVED IN IT UP TO HIS EARS - FOLKS JUST DON'T BUT MILLION DOLLAR HOMES AND LOTS WITH A CONVICTED FELON IF THEY ARE CLEAN.. JUST AN OLD COPPER.

Your opening paragraph has me and my family down pat.