Want A Really “Green” Idea That Saves Lots Of Oil? 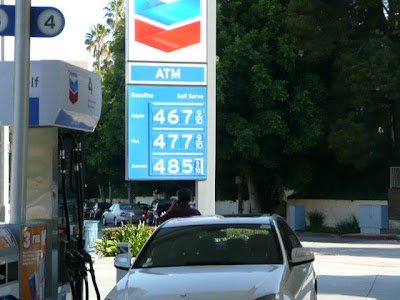 I don’t think anyone is really serious about this issue. I see lots of people claiming to be Green and trying to make money with alternative fuel sources along with smoke and mirrors.

Billionaire, T. Boone Pickens wants us all to switch to his product, natural gas. Aside from making Pickens much richer, that of course would cost Americans many billions to convert vehicles that now burn gasoline.

A simple way to save lots of gasoline would be for America to simply change the work week. Four ten-hour days or even three twelve-hour days would cost us nothing and save us all a bundle. For those who suffer big city gridlock as many as four hours a week of wasted drive time could also be saved.

The fuel savings would be tremendous. There would be fewer accidents on our roads and Americans would have more time to spend being parents instead of commuters.

A bonus to this plan would be a serious reduction of greenhouse gasses dumped into the air would make a visible difference.

The longer work days with three or four days off in a row, has been a big hit with cops everywhere. In Southern California, police departments that don’t adopt the short work week programs find their tenured officers leaving to departments that have. Those cops have portable pension plans so there is little or no downside when they switch departments.

America’s workforce and their so-called “Green” politicians should be at the forefront making this plan happen.
Posted by Paul Huebl Crimefile News at 9/09/2008 07:07:00 AM

Three twelve hour days instead of six ten hour days? Wow, that'd be nice but I'm not sure *my* boss would go for it.
(You can call me "Schmuck.")

This is an excellent idea who's time has come. As you said, it would cost nothing, and would be a great morale booster for the working people who would get more time with their families. Another thing to consider would be flex time so that all of the commuters weren't sitting in rush hour traffic burning up gas trying to get to work. If different businesses had varying start times, then the traditional rush hour would be a thing of the past and traffic jams would ease considerably, thereby saving lots of gas for commuters.