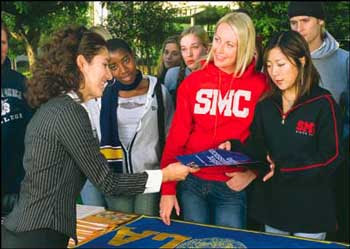 Santa Monica, CA.—No it’s not your Ivy League college where the rich kids go. Here the kids are as diverse as can be and nearly all appear to be in a heartbreaking financial struggle. The one thing the kids I saw didn’t lack was spirit.

A few years ago a case I was working on brought me to Santa Monica College. I sat in classes over several months and watched some amazing kids and teachers. This school loves to advertise itself as a gateway for hardworking students to transfer into more prestigious colleges with the help of scholarships and grants.

Between classes the kids socialized, and talked about their dreams of making it big as entertainers. I’ve watched the same kids nervously count change in hopes of being able to get a decent lunch each day. I’ve also seen these kids trying to look their best for recitals with badly run over shoes that reminded me of my own rough start in Chicago at Loop Junior College.

I watched the kids as they came into their first week of class where they had to get up and perform before their classmates. Few were impressive or stood out in their performances. Nearly all hit some really sour notes. What the kids lacked in skill and polish they made up by being absolutely fearless.

By the end of the semester it was all very different as the kids came off as talented professionals. I’d seen firsthand a huge difference with these youngsters. It was awe inspiring and only after a single semester!

Dustin Hoffman who dropped out of SMC credits the school for his own amazing acting career. It’s funny to remember how Hoffman slid right into the role he landed as a rich college student in The Graduate. That great film made Hoffman a film star and a multi-millionaire.

If I could live my own life over again and become an 18 year-old SMC freshman I would do it in a heartbeat. At SMC wealth is not measured by the amount of cash on hand.
Posted by Paul Huebl Crimefile News at 9/19/2008 04:10:00 AM

Email ThisBlogThis!Share to TwitterShare to FacebookShare to Pinterest
Labels: SMC

Miss SMC red hoody is inspiring me to discuss one or two latin terms with her.

The Dark side is not immediately apparent...