Obama Has Always Hated Your Gun Rights And He Always will 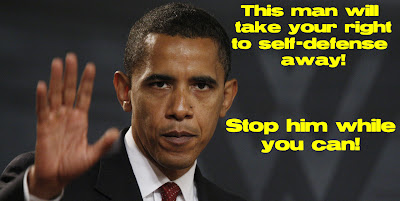 Today Barack Obama’s spokesmen try to falsely present him as a supporter of gun rights. Of course, moving into a national political arena Obama’s gun-rights hatred puts him far out in the Left Wing extreme. The Obama supporters want to soften his life long position to camouflage and diffuse the truth, misleading the nation’s voters.

Obama’s political career was spawned in the Regular Democratic Party of Chicago. For those who don’t know Chicago has been and is controlled by organized crime figures since even before the days of Al Capone. Criminals hate the idea of armed citizens that can resist extortion and every other crime. It’s only natural for them to take the position of demanding outright gun bans. A disarmed and helpless population has always been the goal of Chicago’s politicians.

Obama has never missed an opportunity either in the Illinois General Assembly or the United States Senate to vote to ban or restrict gun ownership and self-defense. Obama has redundantly lashed out against the right to carry concept and has remained in lock-step with Mayor Richard M. Daley that today who is still defying the law of the land handed down in the Supreme Court’s Heller decision.

Yes, Obama as President could either sign into law or veto gun rights bills passed by Congress. More importantly as five members of our Supreme Court are over 70 years old it’s very likely the next President could appoint a record number of judges to the high court. Only one more Liberal gun-rights hater on the court could reverse Heller and give politicians the right to ban firearms.

Just imagine where are gun rights would be if Obama was able to appoint four of his cronies? You need to see firsthand just how Obama’s desperate spokesmen are trying to re-write his horrible gun-rights record.

Doublespeak. Obama has always been for strict gun control of any kind. Now that the pendulum is swinging the other way, he's back tracking.

This worthless POS could publicly ask his mentor, Mayor Richard M. Daley to follow the law established in Heller ending the Chicago gun ban. That will never happen because he supports every outright gun ban.

Obama is finished and he knows it too. I don't like John McCain but I love Sarah Palin.

Obama is the epitome of a crooked lawyer who will shake your hand while reaching around with his other hand and lifting your wallet, all the while smiling right at you. His record speaks for itself, especially on gun control. Pay no heed to his words. His actions speak louder than that.

No matter who takes the white house, a veto proof dem house/senate will do whatever it wishes with our rights, freedoms and liberties.