Nanny Government To The Rescue Again! 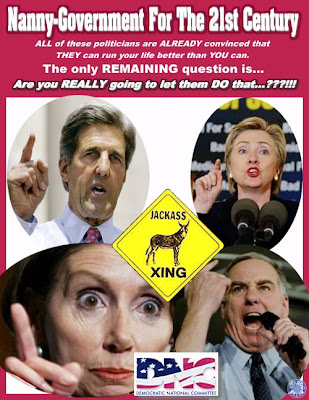 Made a bad investment? Bought a home you could not afford? Lost money on a speculative deal? Never worry because the Democrat controlled Congress will let you reach into your neighbor's pocket for a quick bailout!

When the commercial real estate market went sideways with the Charles Keating crap Congress quickly bailed out the crooks and incompetents with the Resolution Trust Corporation. The government sold all the distressed property by running the largest real estate outfit ever. Boy did we pay!

Next property values went through the roof while Americans bought bigger and better houses than ever with easy no money down loans that were not so easy after all. Fannie Mae and Freddie Mac mismanaged beyond control has a new owner! Guess who? Your nanny was right there with a big milk laden breast to make it all better.

AIG was long rampant with mismanagement and now gets a big reward for a really crappy job, the biggest bailout ever. Free enterprise is over in America.

Terrorists destroy America with bombs. Our own crooked Congress destroys our economy with bailouts to those who deserve it the least. Soon there won’t be enough trees to make the paper required to print the money Congress has funneled for bailouts. Our money will be soon worthless and all our land will be owned by foreign governments. Was this what our founding fathers had in mind?

It's not just Democrats we must blame for thus mess. Unfortunately we have a bunch of lobbyist owned lawmakers who run as Republicans despite the fact that they vote with the Democrats.

It would have been a lot better if on September 11, 2001, Flight #93 hit its intended target and gave us the Congressional term limits we were not smart enough to give ourselves.
Posted by Paul Huebl Crimefile News at 9/18/2008 06:34:00 PM