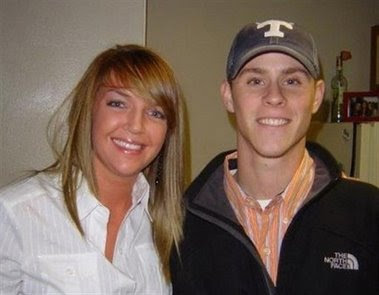 Knoxville, KY—It was a crime of incredible depravity and cruelty was committed against a young White couple by four Black thugs. This story is even beyond the worst horror film any Americans have ever seen. Channon Christian, 21 and Chris Newsom, 23 were savagely carjacked, kidnapped, raped, tortured and murdered in January of 2007. Most Americans never heard about this crime or its frightening details.

The media would not report this racially charged story. The same was true about another horrific bloodbath in Wichita, KS on the cold night of December 14, 2000, Reginald Carr, 23, and Jonathan Carr, 20, invaded the home of three young Wichita men who had two female guests. The Carr Brothers forced all of them to strip naked. They beat the men and raped the women.

In addition to repeatedly raping the women, the Carr Brothers have been found guilty of forcing them to perform sexual acts on each other, sodomizing one of them, and forcing the three male victims to perform sex acts with each of the women. Then the Carr Brothers robbed them and brutally murdered four of them. One victim survived by chance to identify and testify in court. The Carr brothers are waiting today on Death Row.

The media’s mentality is mind boggling when they routinely refuse to provide the race of wanted murder suspects on newscasts. Minority group members, specifically Blacks and Hispanics commit far more of their share of crime. The media’s whitewashing these crimes does not make them somehow go away. Giving Americans the right and training to protect themselves is the only real answer.

I am very upset! Reminds me of a case in Chicago. Years ago a white man and his daughter were walking home from the Sox's game when all of a sudden an African American male jumped out from the bushes and started beating the helpless father with a "wood leg" from a table. While beating the father the suspect was yelling.."I hate white people! I hate white people!"
So the question was raised to the State's Attorney by one bright local news reporter..."Why isn't this a hate crime?" No answer was given.
In certain states a "hate crime" can give you a longer prison term.
I often wonder how his daughter is doing after witnessing her father's brutal murder.

If they need someone to be the executioner for these mutts, offer the job to a family member first. If they don't want to do the deed, let me know. I'll snuff these pieces of trash and sleep like a baby.

A young girl was abducted from a suburban fast food outlet a few days ago and raped. All the local news outlets, radio and television gave a basic description of the offender, except for his race!! And what the fuck good is that?

It could be a fair hair blond Swede, an Asian or a dark skinned black, but you wouldn't know it. The information therefore is useless.

And the reason? Fucking political correctness and sensitivity. May the motherfucking useless media fucks who make these decisions become victims themselves.

I love how the SA office will only give hate crime status to blacks,mexicans,gays but not white victims of violent crime.WTF???

Fucking Animals, no other way to express my rage,sorry.