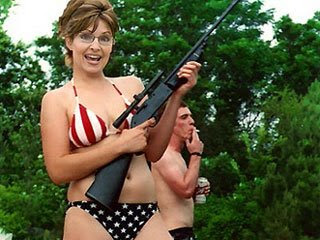 Sarah Palin hit the political scene somewhat like a secret weapon. Palin has what most voters have been looking for. Palin has a fresh face and she is a tough Washington outsider who understands middle-America and the challenges of family life.

Palin and her speech sent major shockwaves into the formerly confident Obama Cabal and their reaction was to undertake a giant smear campaign-Jihad. The problem for the Obama’s people is that the public won’t buy into the falsehoods.

Fox News took on the seven most common phony stories generated and here is their audit of the facts.
Posted by Paul Huebl Crimefile News at 9/06/2008 07:22:00 AM

Email ThisBlogThis!Share to TwitterShare to FacebookShare to Pinterest
Labels: Palin

Paul I knew it had to be a photo shop job the minute I saw the Air Rifle....... I don't think she would settle for a Crossman. The Barracuda seems to me to be more of a center fire type of girl !
I bet she likes the smell of Remington factory ammo!