It’s Time to Test Obama For Drug Use! 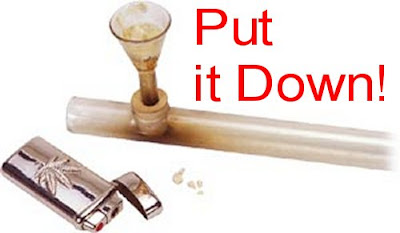 When people apply for even the most menial of jobs drug testing is required. Admitted cocaine user Barack Obama’s displaying signs and symptoms of obvious cocaine abuse. Obama's off teleprompter speech is so slow and so measured and yet so full of constant gaffs.

A physician friend of mine suggested that Obama is sucking the crack pipe. When he called it to my attention I could see the symptoms this medical expert saw and pointed out.

The latest act of drug ridden reckless speech was the incredibly nasty, “Lipstick on a pig” crack he directed at V.P. candidate Sarah Palin that’s preserved on YouTube for posterity.

That kind of offensive gutter politics is what we’d saw in old style Chicago ward races for Alderman where the inebriated candidates never cared because the elections were always fixed.

Obama’s offensive “Lipstick on a pig” remark should cause every woman in America to think twice about Obama and just who he really is.

He's a racist a felon, a left wing socialist and now a sexist. And I suspect hes more communist than we yet know.

O-boma is a crack an admitted drug abuser, crack pipe smoker and there are at least two men who state that he had homosexual relations with them. All this from a jerk who wants to be president of the US. A family man he is not. I think his wife is also a racist. He knows his time is limited trhat he is the next democrat loser - another one who shot himself in the foot by not picking Hilary to run with.. bye bye druggie!