Wyoming Hunter Arrested At A Denver Hotel Over Cased Rifle 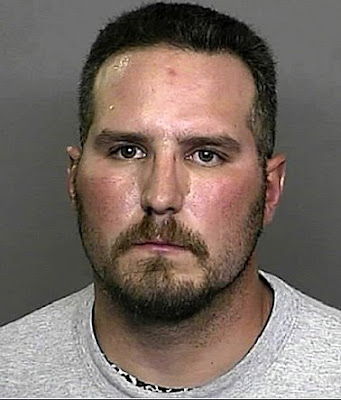 Denver, CO--I don’t give a rat’s ass that Democratic Party politicians are in town for their convention. American’s lives and rights should take prescience over politics.

It’s not so in Denver when a Wyoming businessman and hunter checked into The Grand Hyatt hotel with two rifles and two handguns in luggage he brought to town for some gunsmith work for a hunting trip.

Joseph Calanchini was arrested and the hotel was evacuated by candy-assded Denver police.

Calanchini told police he was in Denver on business and that he brought the guns to be repaired at a local gun shop for an upcoming hunting safari trip in Limpopo Basin, South Africa on August 28.


He told police that he had just picked up his rifles from the Sportsman's Warehouse and had them in a locked gun case when he checked in at the Grand Hyatt. The clerk checking him in noticed the rifle case and called security.

Calanchini, who sells drilling tools across Colorado and Wyoming, says he is a frequent guest at the Grand Hyatt.

This seems on its face to be a clear and direct violation of Calanchini’s civil rights. I hope that the City of Denver pays for their outrageous action in a federal civil court soon.

Calanchini is being held on $10,000.00 bail for a court appearance for carrying a concealed weapon.

Perhaps too many of America’s politicians are not afraid enough of the population or outrages like this would not happen.

Imagine the panic that this legal .50 cal equiped Hummer owned by Machinegun Tours of Denver would bring to those cowardly gun-hating Liberals if it came anywhere near the DNC. 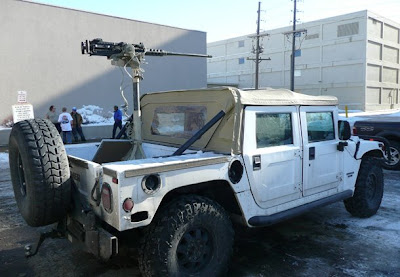 They think Obama will be a serious target for lots of rifleman and are over-reacting.

I don't think a lot of people would be too sad to see that happen either.

I hope the NRA jumps on this case. Could be another opportunity to put down another lame gun law. Did he even break any laws?

Paul we've never met, but I enjoy surfing your blog when I have time.

While I too disagree with the arrest, I must be fair.

At least he didn't stupidly forget he had a gun, as did the Actor you posted about.

However this all could have been avoided. There was many things this hunter could have done beforehand. To avoid the commotion and arrest. And he still could have brought his guns into the hotel. Taking weapons into a hotel lobby at the time of a Dem or GOP convention was flat out unwise.
Who knows maybe he gave conflicting statements to the police. MAYBE he couldn't prove he was registered and preplannede to go to this hunting safari.

I too am an advocate for gun rights, but doing so responsibly.

In my opinion the hunter failed to do it responsibly, re the planned DNC convention.
It only takes one to ruin it for the rest of us

Bear I'm mind there was not a gun show at this hotel at that time.

Possessing, owning or lawfully carrying of firearms in a non-threatening manner is always both responsible and constitutionally protected activity in America. Government’s agents engaging in willful violation of civil rights is NOT.

Politicians or their presence does not and should not allow for the suspension of the Constitution of The United States of America.

It’s the Bill of Rights that makes this country great. In Denver yesterday it was the land of the Gestapo and that brought with it the embarrassment of some third world banana republic with it.

In America our laws require intentional violation in order to prosecute and convict. Charging people who forgot they had their gun in a “gun free zone” is unlawful and un-American.

Doesnt matter if there was a convention or not.They guy did NOTHING wrong.The Denever PD suffers from the Failed Model Approach that is infecting departments across the nation.

Todays officers are traffic sausages that prey on hard working Americans for $$$.Im surprised they didnt Tase they guy.