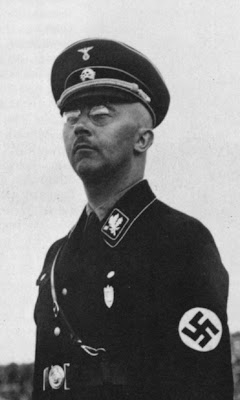 Homeland security announced their new policy to put American travelers through yet another level of assault, insult and privacy invasion. The late Director of Nazi Germany’s own version of Homeland Security, SS Administrator, Heinrich Himmler certainly would have coveted this kind of tool for the Third Reich.

Traveling with electronic storage devices? Lap tops, cameras, Ipods, Blackberrys, cell phone and items not yet invented are waiting for total data inspection by Homeland Security agents. The 9th Circuit Court of Appeals in San Francisco says the government needs no search warrants or probable cause to believe a crime is involved.

Government officials are now free to simply confiscate and copy your information and share it all with any and every other government agency.

There can be no question that America’s Thought Police have arrived and are in business. Our judges simply refuse to protect our rights under the Fourth Amendment anymore.

We need not submit to this like sheep if we force Congress to end this privacy invasion. Our vastly ignorant American voters will never bother to contact their members of Congress demanding that the Thought Police be disbanded. On the contrary look for government to expand their efforts.

Read More about the latest government war on freedom and liberty in America here.
Posted by Paul Huebl Crimefile News at 8/01/2008 09:07:00 AM

The true purpose of the Second Amendment is coming.

So much for the fourth and the reactionaries of the SCOTUS.

Put your important data in a USB thumb drive - easy to hide and they are getting larger and cheaper by the day. There's a Thunderbird email client that will run on one and can be used on any computer leaving no trace.