John Edwards Scandal Is Not About Sex 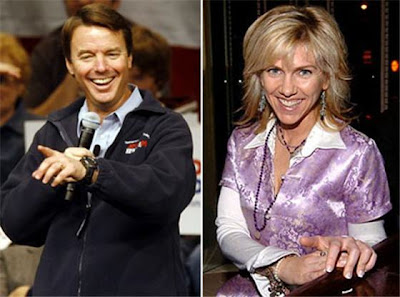 Beverly Hills, CA—John Edwards got caught with his pants down by The National Enquirer. Reporters and photographers cornered him like a rat at the Beverly Hills Hilton.

The mainstream Liberal Media began a conspiracy of damage control and cover-up for one of their favorite Democratic icons, burying the story by simply not reporting it.

What’s troubling here is not Edward’s failure to keep his zipper up in the face of temptation, but the payment of hush money to his paramour, Rielle Hunter from campaign contributions.

Were serious felony crimes committed? Yes, several seem to be involved here. Theft, money laundering, extortion and maybe even racketeering seem to be well founded. Let’s present all the facts to a Federal Grand Jury.

Sex, lies and that tattletale videotape are so entertaining. Especially when they involve politicians who become caught up in the very laws they themselves author for the rest of us.

You say that you can’t stand many of the laws in America? Our politicians pass laws faster than they can be printed. They are on a non-stop mission to put every America behind bars. A friend of mine addressed it this way, “Let us create one more regulatory offense. 2.3 Million behind bars is not enough. Buy stock in private prisons. This will be a growth industry."
Posted by Paul Huebl Crimefile News at 8/10/2008 06:02:00 AM

That little short pol sure got wrapped up in himself and deceived his poor wife, & kids, But that tramp he picked up with is a real dog! I bet she barks! It kills me how these so called wise men get caught by an ugly bitch - (Bill Clinton and that fat pig, and John Edwards and his scag). Jesse Jackson at least boffed so many of the bitches that we can zero in onw any one - as they are all oinkers too! Jessie pays for then out of that money he extorts from legit, white corporattion's under the guise of feeding the "hungray" as he says. The blimp Al Sharpton and the fag Oboma will go down next, or has he already gone done? At least according to that limo driver he "smoked" the sausage already. All these wise guys get caught but I know dumb truck drivers who cheat on their wife every sat. night and NEVER get caught. I say vote for McCain, his poking days are over and he don't know about Viagra! He's my guy for President!!!

jOHN EDWARDS NEEDS TO MEET MS. BOBBIT FOR HIS NEXT ROMP IN THE HAY!!! WHAT A PIECE OF GARBAGE. HIS DYING WIFE CAN LAY IN BED DYING NOW AND THINK OF HER SO CALLED LOVING HUSBAND HOOKING UP WITH THIS BIMBO AFTER THEY ARE SHOVELING DIRT ON HER. THIS PRESIDENT WANNA BE CAN KISS HIS DEVOTED DYING WIFE ON HER DEATH BED AND SHE CAN TAKE HER LAST BREATH KNOWING HE HAS A FUTURE WITH MS BIMBO AND HIS LOVE CHILD. WHAT A SLOB OF A MAN. WHY WERE CHASITY BELTS CREATED FOR WOMEN??? CAN SOMEONE TELL ME?? KOBE BRYANT, MICHAEL JORDAN, PRESIDENT CLINTON, NEWT GINRRICH, JOHN MCCAIN, RUDY GUILAIANO, GOVERNOR OF nEW YORK, cHRISTIE bRINLEY'S HUSBAND, HUGH GRANT, THE SENATOR PLAYING FOOTSIES IN THE BATHROOM AND THE LIST GOES ON AND ON. PLEASE NAME ME ON NOTORIOUS WOMEN ACCUESES OF ALL THIS CHEATING. DON'T GET ME WRONG I LOVE MEN AND I WANT TO RESPECT OUR POLITICIANS .....I JUST WANT THESE GUYS TO ACT LIKE RESPONSIBLE MEN HOLDING OFFICE AND NOT LITTLE HORMONES RUNNING AROUND THE NATION--ESPECIALLY WHEN THEY ARE WORKING IN THE OVAL OFFICE OR RUNNING THE STATE OF NEW YORK ON OUR DIME!!!!!!!

What a piece of vile excrement.