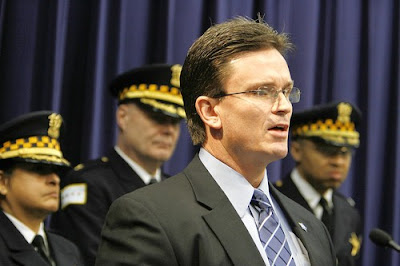 Chicago, IL—It was October 8th 2005 when Chicago police officer Michael Mette of the Fillmore District was attacked by a Dubuque college student, 20-year-old Jake Gothard while attending a birthday celebration at his brother’s home. Before it was over this week, officer Mette was arrested, prosecuted, convicted and now faces a mandatory five-year Iowa prison term.

Iowa justice is beyond strange because at a Dubuque County Court bench trial the judge, Judge Monica Ackley found that Chicago Police Officer Mette "was not the initial aggressor of this incident," Jake Gothard was. Astonishingly, Judge Ackley ruled that Mette was guilty, because even after Gothard struck him three times, Mette should have just ignored it and retreated.

Officer Mette's infamous felony crime was to punch the 6 foot, 2 inch tall Gothard once in self-defense knocking him out. Gothard has demonstrated his inability to hold his liquor landing on local court dockets on a regular basis. Mette has been serving hard time in an Iowa prison while he appeals that dubious conviction to the Iowa Supreme Court.

As for J-Fed He still has to mend some fences in order to lead the department, but this is a big step in the right direction.
Posted by Paul Huebl Crimefile News at 8/13/2008 04:39:00 PM