I Must Be Psychic James Fayed Was Arrested On Charges Unrelated To Murder! 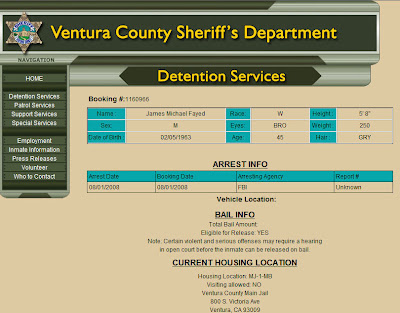 Ventura County, CA-On Thursday, July 31 I made a prediction on this blog. This of course involves the brutal stabbing death of 44 year-old Pamela Fayed on the third floor of a Century City parking garage.

The exact quote was, “If there is the slightest amount of probable cause for criminal fraud you can count on law enforcement pulling that trigger and arresting James Fayed just to lift his passport if for no other reason pending any trial. Let me go out on a limb and predict that a quick arrest unrelated to murder is in the cards.”

The L.A. Times has just reported the arrest of James Fayed by FBI agents in connection with business irregularities involving, Goldfinger Coin and Bullion Sales and a second Internet business, e-Bullion.

Last night Law enforcement officers executed search warrants of Fayed’s Moorpark home and business locations. Fayed was arrested and is being housed without bail in the Ventura County Jail pending his appearance before a U.S. District Court Magistrate. Bail will be set and Fayed will be required to surrender his passport prior to being released on any posted bond.

This arrest now gives the LAPD time to analyze evidence obtained so far in their ongoing murder investigation. I suspect Anthony Fayed may also wind up in law enforcement’s crosshairs before long.

I know them all except Pamela Fayed. I new James and I was married to Anthony for only 2 years, I soon learned he was not quite right. Plus the drugs and all the deep hate for anyone who wasn't of white descent, when he's Lebanese; claims to be Italian(with a name like Fayed??, who's he kidding?) Does the AB know he claims to be close to him?? I am sure they wouldn't be happy. Related to the Fayeds of Harrods- WOW that's just plain ridiculous. I have known the family they are from Maryland and they owned a electrical company and ripped soooo many people off before moving out west. He threatened to dig my grave and put me in it.. I waisted no time in leaving Arizona that very day. I knew he meant it! I have had NO contact w/ him since. It would not surprise me if Tony was involved in this murder. He is capable and willing just for the thrill- I have heard him say he would love to kill someone just to know how it felt. look the following web site up and see for your self- http://casesearch.courts.state.md.us/inquiry/... look up Fayed (last name only, it brings all the dirt up!) Lucky for me I got out when I did or this could have been me. I have been married to Police Officer for 10 years now and have 3 wonderful children.

i grew up with jim and the fimily . this doesent supprise me or most of his friends