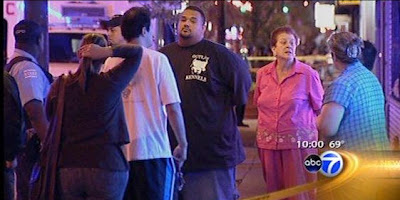 Chicago, IL—Four were wounded in the Hellfire unleashed in a Chicago jewelry store on the city’s South side. Three men entered, displayed handguns and announced the robbery.

The store owner, Sergio Vazquez drew his own handgun and fought for his life. When the shootout was over, two robbers were hit by gunfire along with a store employee and a man sitting in a vehicle outside the store. One of the robbers is said to be in critical condition at this time.

Police were interviewing witnesses and participants as well as reviewing surveillance video. Questions remaining is whether police will charge the store’s owner with Chicago’s unconstitutional law that bans handguns? Will the City of Chicago dare violate the Civil Rights of Sergio Vazqez to own a handgun?

Hopefully the storeowner gets a nice pump shotgun with some 00 buck for the next intruders.