Criminal Cases Being Dismissed Because Of Judge Shortage-- A sign of Things To Come? 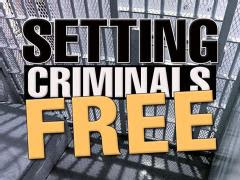 Riverside, CA—Just this month 25 criminal cases were dismissed because of a shortage of judges. Constitutional rights to a speedy trial of these accused people prevented the cases from being continued until more judges were available. Last month 22 alleged criminals were freed.

The real problem is we have too many petty victimless laws on the books. We have more people per capita incarcerated in our country than any other nation on earth. We need to concentrate on crimes that are dangerous or thefts instead of sins like, gambling and prostitution crimes. California has many more confusing, highly technical and unneeded gun laws on the books than any other state in the union. Those laws do nothing for public safety and just clog the courts with hapless gun owners, hookers and gamblers rather than real criminals.

Sounds like that largest county in the nation everyday, C(R)ook County.