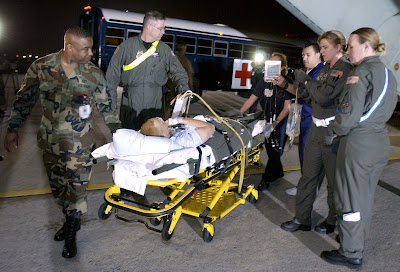 Landstuhl, Germany--The U.S. Army Hospital Landstuhl Is Ground Zero for all American military heroes seriously wounded in combat. Arriving here means these kids have lost their limbs or suffered painful and permanent disabilities for doing what your fellow Americans asked them to do.

I don’t give a rat’s ass what anyone thinks of our involvement in this or any war. These boys and girls with broken bodies are our very own children.

Barack Obama snubbed our own heroes for an international “rock Star” style photo-op with everyone but those who suffered in the service of our country. I for one can’t stand the Idea of this bum holding the office of Commander in Chief. Barak Obama’s disrespect for our wounded soldiers is absolutely unforgivable.

It beyond shocking to see so many young allegedly educated American’s supporting Obama for President. Too many of our schools have obviously failed our children.
Posted by Paul Huebl Crimefile News at 8/03/2008 06:59:00 PM

Obama's going to lose this election.

He also does NOT support POLICE!

Some time ago just before he announced he would run for presz., I was working in uniform at O'hare Airport(Chicago). As he walk towards me I looked at him and said" Hello senator", as he hurried on past me without a word.
I thought, maybe he didn't hear me or didn't notice me. He comes around a second time, I acknowledge him by a hello senator again and he walks right past me without acknowledgement.

Couldn't even take the time for a hello.
What a mutt

Piss on this son-of-a-bitch ! Any now serving or veteran that votes for him should be taken out a whipped. He is NO good for the American people . He should go back to being a Senator from Illinois.

People have bad days and maybe he didn't hear you.

People have bad days and maybe he didn't hear you."

This guy is running for the highest office in the land. He should be on his best behavior at all times during his campaign. To purposely NOT acknowledge a greeting from a voter not once, but twice, makes him a "mutt" in my eyes too. And considering that the "greeter" was a Chicago cop makes it all the more blatantly obvious that he doesn't care for the police. Remember, he attended Jeremiah Wrights church, which indoctrinated him and his wife with white hate. Cops are a symbol of government power and authority and are the first group that certain minorities claim to be abused by. Obama believes all of that racist garbage, but he is so smooth and slick you would never know it, unless you did a bit of research and found out who the man really is. It's not pretty.

No, not saying "Hello" or acknowledging another human being is saying, "I"m above you. I'm better than you and I don't have the 1/10 of a second to even whip a smile at you or say 'Hello' back."

I was recently in uniform and standing in a small crowd of people waiting at a local watering hole. I was standing 3' from a young african american. He looked at me and I smiled and said, "Hello". He turned and completely ignored me with such utter disrespect for a fellow human being that just makes you sick. What ever happened to the idea that a person no matter what job they do or position they hold is just another human being? When you stand before the pearly gates it won't matter your status, how much wealth you've accumulated, your race, or your job. Ah well I guess I'm just a southern gentleman.

God help us. This guy is such a loser.