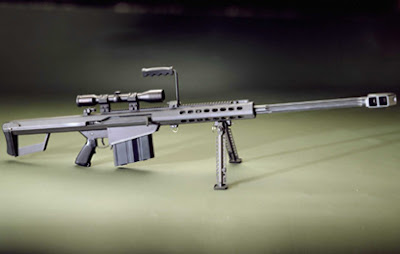 In D.C. vs. Heller the court gave gun owners the gift of vague descriptions of firearms that are protected and therefore cannot be banned.

The Court avoided defining constitutionally protected weapons other than to say that, it protects handguns and other weapons "in common use." The court suggested that dangerous or unusual weapons may not be protected and sidestepped saying just what those were.

Weapons in common use applies to military and police weapons. That makes the case that the banned black semi-automatic rifles and pistols with large capacity magazines that are, in common use cannot be denied.

This has gotten interesting, because USA vs. Miller held military type weapons are protected. Now Heller says that gun possession is an individual right rather than a government or collective right.

I can only see one meaning here and that is a much broader assortment of weapons are now definitively protected including all semi-automatic and perhaps fully automatic weapons.

I take this to mean that neither states nor the federal government can ban the ownership of National Firearms Act weapons. Before you could only own these in states that allowed these registered class III weapons.

The bans on .50 caliber rifles and the high capacity, “black guns” can no longer stand.

We will wait as nearly every criminal defendant charged with various gun law violations and their lawyers wait for a turn at the Wheel of Justice. The slower civil cases brought by the NRA and Second Amendment Foundation may be moot by the time they are heard.

The bad news here that people are rarely arrested for simple possession of banned weapons. Those arrested are usually charged with assault, or a smorgasbord of other offenses. It will be gun collectors or others caught with these weapons by chance that will be testing the various gun bans in court.

California, New Jersey, New York and a few other places are going to see their penal codes shrink as these now invalid laws cease to exist.

Paul, in my heart, I pray you're right. But in my gut, I know you're wrong.

That's a beer I'd love to buy you.

They arent getting my Barrett M82a1!!

Paul,the real intent of the Second Amendment is never discussed.The NRA and every other pro-gun group play the PC game too.

The founding fathers wanted to make sure its populace was properly armed to remove a tyrannical government,PERIOD.

The 1st Amend. was put in place as peaceful methods to pressure those bent on evil.N0.2 gives you the teeth No.1 the bark.

Miller basically affirmed our god givin right to own any small arm suitable for military/police use.

You cant believe the amount of CPD f*&ktards that think machineguns-silencers-short barreled shotguns are illegal.

They oviously missed that in detective school and never covered what a form 1 or 4 is.

Let’s hope those Chinese bastards invade and give us their way of life. Our current politicians would welcome them like long lost friends

Careful what you wish for.The Wal-Mart supply house is building a nuclear powered aircraft carrier and a ballistic missile sub.Both of these are used for projecting foriegn policy,thats what we do with ours.

I agree that the court never got the Second Amendment right. It was intended that whatever weapons the government had we could keep and carry.

The problem is those nine Justices get the last word and they have spoken. They gave us what we got and it could have been a whole lot worse. I doubt we will get anymore from the court I our lifetime. We need to protect what we have.

Let’s hope those Chinese bastards don’t invade and give us their way of life. Our current politicians would welcome them like long lost friends and help them collect our firearms with the UN troops.

Paul,use this one on the idiot crowd when they talk about how deadly guns are.Right now it would cost about $4.24 ymmv.