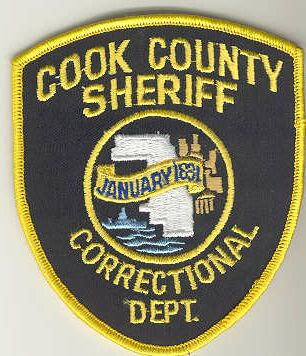 Chicago—Sheriff Tom Dart has allowed the inmates to run the asylum. In a nearly 100 page report the Justice Department exposed dangers, appalling medical care and a mass violation of the civil rights of Cook County Jail's inmates.

Most people don’t care about jail conditions until they or a family member wind up there. What we fail to think about are the people who were arrested and awaiting their day in court. People never before arrested are too often there as a result of mistaken evidence or witnesses and are housed with the killers and rapists.

The sad truth is the jail is inhabited by 90% African-Americans. Young white inmates are routinely forced to submit to sexual assault by the African-American inmates. It’s always been that way.

I first found myself sent to the jail in 1967 to handle some nasty disturbances when the infamous Jack Johnson was warden. He used the Barn Boss system of letting inmates enforce discipline. Cash could buy an inmate anything including privacy with his girlfriends. I remember well the electric chair near the four, deluxe Death Row cells.

It was only five years earlier when cop killer James Dukes got his final reward in the Cook County hot seat. I talked to an old reverend that walked many a man to his death in that chair. Fuhrman vs. Georgia changed all that and the chair was later sent to the Illinois Department of Corrections never to return.

After a major jail scandal Sheriff Joe Woods fired Jack Johnson and brought in Winston E. Moore to clean up the mess. The jail guards got a raise and the new misleading title of correctional officer. They were deputized and brought in under the Sheriff’s Merit Board.

In those days the Federal Metropolitan Correction did not exist and the Cook County Jail had an entire tier reserved for federal prisoners. Since most were white collar criminals or bank robbers it was the cleanest and safest part of the entire jail.

Just South of The Cook County Jail there were two facilities run by the City of Chicago. One was the Cermak Memorial Hospital which held every level of prisoner and the other was the Bridewell House of Correction that only held low level misdemeanor prisoners. These facilities were somewhat clean and safe and a better place to be held than the County Jail.

In 1970 Sheriff Joe Woods suddenly found the city jail facilities, prisoners and their guards handed over to him and that’s when the Cook County Department of Corrections was formed.

It was only a few years later when the Department of Corrections Executive Director, Winston Moore was indicted and tried for his own missteps as the old problems never went away. It was my old friend, former assistant State’s Attorney Susan Sherwin who prosecuted Moore who was ultimately acquitted.

Nobody in their right mind wants to be a jail guard so the jail is perennially understaffed and always over-crowded. Sexual assault is still realty. Jail rape is nearly always covered up because the victims face severe beatings or death if they complain to the guards. What man would ever admit getting the Buga-Buga by force in jail?

So now Sheriff Dart has inherited the problem and can’t really begin to deal with it because of the outrageously corrupt Cook County Board. No amount of deodorizer will fix this mess. Should Dart fight for the funds and tools he needs he will never see another term as Sheriff. The Cook County Democratic Party will dump him in favor of yet another yes man with missing testacals.

I wonder what pretend reforms are in store for the white inmates with the sore rectums?
Posted by Paul Huebl Crimefile News at 7/19/2008 11:15:00 PM

That report doesnt even scratch the surface!!

The biggest problem with Crook County is the illegal hiring practices.The political patronage system is totally out of hand.

Crook Counties personal are all political hacks that are totally unqualified for their positions.

Keep talking this way and Daley,Stroger etc. will have your blog shut down and you thrown in the county jail!!!!!!!!

Anonymous said...
Keep talking this way and Daley,Stroger etc. will have your blog shut down and you thrown in the county jail!!!!!!!!

If the FBI had the green light careers could be made for the next two decades.

Anonymous said...
Keep talking this way and Daley,Stroger etc. will have your blog shut down and you thrown in the county jail!!!!!!!!


Easy there lil jail guard.Go sell some more raffel tickets.That is all.