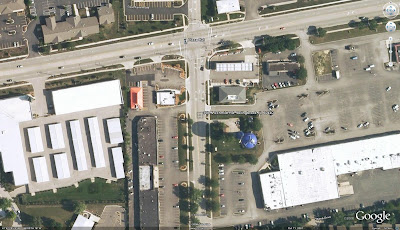 Bolingbrook, IL.—Self -described Illinois State Police informant, Len Wawczak is in custody of Bolingbrook police after he was arrested for battery on Drew Peterson outside the Hydrogliphics barber shop on Schmidt Rd in Bolingbrook just walking distance from Peterson’s home, The attacked happened shortly before 2:00 PM.

Witnesses claimed to have seen the "wired" informant attack Peterson while Peterson's back was turned. Reportedly neither Peterson nor his attacker required emergency medical treatment. Wawczak should be eligible for release on the standard $1000.00 bail after he completes the booking process and his fingerprint clears a standard warrant check.

Update: Bolingbrok police have asked the Will County State'sAttorney for approval of felony charges. If they are approved the bail must be set by a judge in Joliet before Wawczak can be released.

Second update: Bollingbrook police have infact charged Wawczak with a single count of misdemeanor battery on the signed complaint of Drew Peterson. Peterson has left the Bolingbrook police stattion. After processing Wawczak may post his bail if he has the dough.
Posted by Paul Huebl Crimefile News at 7/25/2008 12:21:00 PM

If the 'atack' happened shortly before 2pm - how did you report it shortly after 12 pm?

Don't blame me for the magic of our time zones!

This is good news. if he was still wired by the police..as their agent... LAW SUIT

What I see Drew online as we speak? He has been logged on all morning? Where is the proof of this nonsense?

What???????? Drew is online right now and has been lit up all morning where is the proof of this nonsense?

Where is the proof of this nonsense? Drew has been lit up all morning and is still lit up and online!!

Okay Paul, how'd you beat every major news outlet on this story?

Those pesky lil time zones; they getcha everytime and seem to create this outrageously mysterious mind-boggling info highway abyss, whereby the reader must assign 'ESP' like super powers to the author. (I prefer to think the author IS in possession of super powers, but that's just me.)